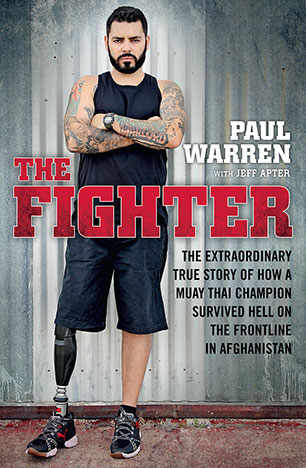 The remarkable true story Paul 'Warlord' Warren, the young soldier and former Muay Thai boxing champioin, who lost one of his legs when an IED exploded during a mission in Afghanistan. A story of enormous courage, great determination and deep love.

Paul 'Warlord' Warren was an Australian Muay Thai kick-boxing champion who was used to the physically punishing world of martial arts at its highest level. But nothing could prepare him for the torment he would face in the Australian army. One month after he arrived in Afghanistan as a soldier in the ADF, an IED exploded, tearing off his right leg and instantly killing his mate, Private Ben Ranaudo. It was 18 July 2009 and Ben was the campaign's eleventh fatality.

Private Warren's life was saved by the quick work of his battalion, who got him a helicopter within 16 minutes for surgery. Paul was flown to Germany and then back to Australia, where he received treatment for his injuries in Brisbane. Although he had only known his partner, Dearne, for four months before his deployment, she moved to Brisbane to assist his recovery.

There were many dark times as Paul struggled with the shattering effects of PTSD, and guilt and grief over the death of his mate Benny. At his lowest ebb, Paul thought about taking his own life, as so many other soldiers in similar circumstances continue to do. Recovery was a slow and at times desperately painful process, but the discipline and toughness he'd learned from his martial arts background and the fierce love of Dearne helped him mend.

The Fighter is a story of courage, determination and love that will move all who read it.
More books by this author

A former kick-boxing champion and member of the ADF, Paul Warren now works for Mates4Mates, an organisation dedicated to helping injured soldiers. He and his wife Dearne live in Townsville with their two children.