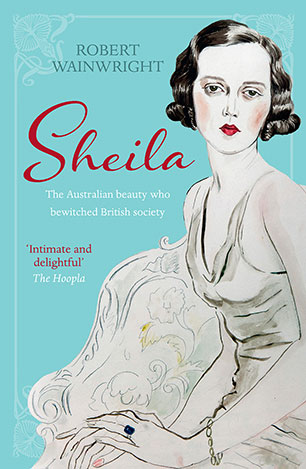 Born on a NSW sheep station, she wedded earls and barons, was feted by London and New York society, and when she died was a Russian princess.

Sheila wedded earls and barons, befriended literary figures and movie stars, bedded a future king, was feted by London and New York society for forty years and when she died was a Russian princess.

Vivacious, confident and striking, Sheila Chisholm met her first husband, Francis Edward Scudamore St Clair-Erskine, a first lieutenant and son of the 5th Earl of Rosslyn, when she went to Egypt during the Great War to nurse her brother. Arriving in London as a young married woman, the world was at her feet - and she enjoyed it immensely. Edward, Prince of Wales, called her 'a divine woman' and his brother, Bertie, the future George VI of England (Queen Elizabeth's father), was especially close to her. She subsequently became Lady Milbanke and ended her days as Princess Dimitri of Russia. Sheila had torrid love affairs with Rudolph Valentino and Prince Obolensky of Russia and among her friends were Evelyn Waugh, Lord Beaverbrook and Wallis Simpson.

An extraordinary woman unknown to most Australians, Sheila is a spellbinding story of a unique time and a place and an utterly fascinating life.
More books by this author

Robert Wainwright has been a journalist for 25 years, rising from the grassroots of country journalism in Western Australia to a senior writer with the The Sydney Morning Herald. His career has ranged from politics to crime, always focussing on the people behind the major news of the day. He is the author of Rose: The unauthorised biography of Rose Hancock Porteous (2002), The Lost Boy (2004) and The Killing of Caroline Byrne (2009).