Queen Emma and the Vikings

A History of Power, Love and Greed in Eleventh-Century England 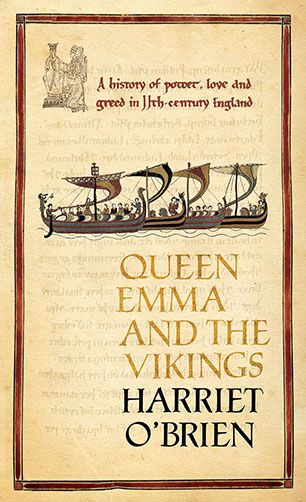 A stunning history of power, love and greed in eleventh-century England - the remarkable story of Queen Emma and the Vikings

Emma was one of England's most remarkable queens: a determined, manipulative and forceful woman who made her mark on a Europe beset by Vikings. Her story is one of power, politics, love, greed and scandal a thousand years ago.

By birth a Norman, she married and outlived two kings of England. One was an incompetent monarch some 20 years her senior; the other was a Viking warrior 10 years her junior. When she died at the age of nearly 70 she had also witnessed the coronations of two of her sons: Harthcnut the Viking and Edward the Confessor. From child-bride and international pawn, she became an unscrupulous political player and was diversely regarded as a generous Christian patron, the admired co-regent of the nation, and a Machiavellian mother. She was, above all, a survivor: her life was punctuated by dramatic falls, all of which she overcame.

In tracing Emma's story the England that became her home emerges: far from being benighted, it was a rich nation with strong Christian and cultural traditions that are the root of Englishness, the Anglo-Saxon stock. Yet Emma herself was the formidable catalyst for the country's immutable change into a Norman state. In 1066, fourteen years after she died, her Norman family invaded England. Emma's story also tells us why this happened.

Harriet O'Brien gives us a vivid picture of England after the dark ages - from its food, clothes and herbal remedies for infertility to Viking boat building and laws against over-eating. Richly detailed and beautifully written, Queen Emma is history at its most compelling.
More books by this author

Harriet O'Brien is a writer and editor working in London for a range of newspapers and magazines including The Independent and Conde Nast Traveller. Her first book, Forgotten Land - a rediscovery of Burma, won the Yorkshire Post Best First Work Award in 1991.