The Extraordinary Life and Crimes of New Zealand's Most Infamous Escapee 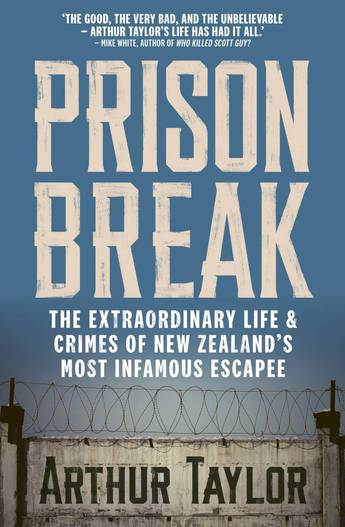 Arthur Taylor is New Zealand's best known, most influential, and colourful career criminal. A household name, he was paroled from prison in 2019 after more than 38 years behind bars.

His life story is nothing short of remarkable. He has more than 150 convictions ranging from bank robberies to fraud, theft, escaping, and having weapons and explosives.

He has served in New Zealand's most notorious high security prison, Auckland Prison at Paremoremo, including eight months in solitary confinement. But Arthur isn't what most people might expect.

Now in his sixties and living in Dunedin, Arthur is an engaging, highly intelligent man who studied law behind bars and took on precedent-setting cases against Corrections and the Crown, cementing himself as one of the foremost authorities on prisoners' rights. He has become, perhaps, a poster child for redemption and rehabilitation. He is now an advocate for prisoners, and a bloody good storyteller.

During his time in prison, Arthur masterminded two particularly audacious prison escapes including a weeks-long caper where he and three others holed up at a millionaire's mansion.

He has shared cells with some of the country's most feared killers (readers will come across high profile inmates such as William Bell, Liam Reid, Scott Watson, Leslie Maurice Green and Graeme Burton) and is responsible for one of the country's most bizarre behind-bars weddings. His stories of prison life are entertaining, gripping; sometimes horrifying.

This book is the story of Arthur Taylor's life, and a potted history of the prison system, particularly prisoners' rights, in New Zealand, including the work put into ensuring prisoners were given the right to vote. It details Arthur's mistakes, his triumphs, and how he outsmarted prison guards - "screws" - Corrections, and other officials, time and again.

It's a warts-and-all look at prison life, and a no-apologies insight into how the prison system can change you for the better, or the worse, told in Arthur's own distinctive voice.
More books by this author

Arthur Taylor is one of New Zealand's most high-profile prisoners, having more than 150 convictions and having served more than 38 years in prison.

While in prison, Arthur educated himself, studying by correspondence for a legal executive qualification. He has represented himself in court since the 1980s, often successfully and is regarded as one of New Zealand's foremost authorities on prisoners' rights.

Arthur is now on parole and living in Dunedin where he continues to advocate for prisoners' rights.