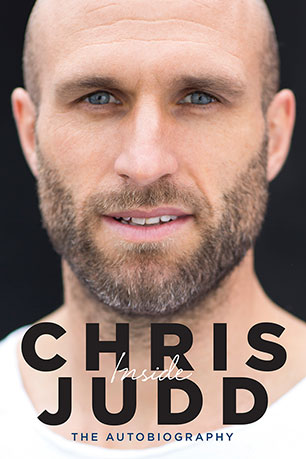 Intelligent, surprising, and head and shoulders above its competition - the autobiography of Chris Judd is the football book of the decade. A rare and intimate look inside the world of the elite sportsman.

Few people know Australian Rules football better than Chris Judd. He's one of the game's out-and-out champions, having captained two of the greatest clubs in the league - the West Coast Eagles and Carlton - and taken the Eagles to premiership victory in 2006. He's won the Brownlow Medal twice, been a dual Leigh Matthews Trophy winner - awarded to the AFL's Most Valuable Player as voted by the players - and selected as an All Australian six times.

His autobiography is a unique journey into the game, describing with extraordinary candour what it's like to climb to the highest levels, to achieve the ultimate goal of your sport, and to experience the full measure of heartache and failure that inevitably accompanies more than a decade of playing at the elite level. Few sportsmen have shared such intimacy and insight into their world, and the result is a book that's worthy of Chris Judd the player - intelligent, surprising, and head and shoulders above the competition.
More books by this author

Chris Judd has been widely recognised as one of the greatest AFL footballers of the modern game. In a career that stretched from 2001 to 2015, Judd captained the West Coast Eagles to premiership victory in 2006, won the Brownlow Medal twice (in 2004 and 2010), was twice awarded the Leigh Matthews Trophy for the AFL Players' Association's Most Valuable Player, and was selected as an All Australian six times. He lives in Melbourne with his wife and two children.