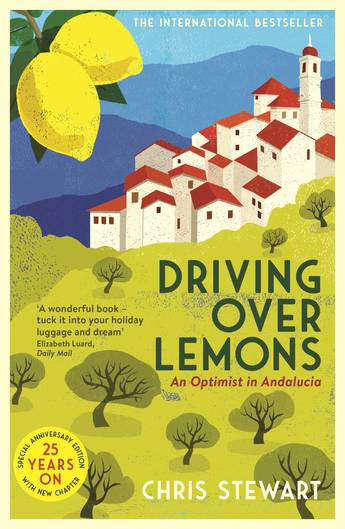 Over two decades ago we set up Sort of Books to help our friend, the some-time Genesis drummer Chris Stewart, bring his sunlit stories of life on a Spanish mountain farm to print. Ever the optimist, Chris hoped to earn enough money to buy a second-hand tractor for his farm. He got his tractor, as the book spent a year on the Sunday Times Top 10 charts and went on to sell a million and a half copies.

His story is a classic. A dreamer and an itinerant sheep shearer, he moves with his wife Ana to a mountain farm in Las Alpujarras, an oddball region in the south of Spain. Misadventures gleefully unfold as Chris discovers that the owner had no intention of leaving. He meets their neighbours, an engaging mix of farmers, shepherds and New Age travellers, and their daughter Chloe is born, linking them irrevocably to their new life. The hero of the piece, however, is the farm itself - a patch of mountain studded with olive, almond and lemon groves, sited on the wrong side of a river, with no access road, water supply or electricity. Could life offer much better than that?
More books by this author

Chris Stewart shot to fame with Driving Over Lemons, which became an international bestseller, as did its sequels, A Parrot in the Pepper Tree, The Almond Blossom Appreciation Society and The Last Days of the Bus Club. Chris had prepared for life on his Spanish mountain farm with jobs of doubtful relevance. He was the original drummer in Genesis (he played on the first album), then joined a circus, learnt how to shear sheep, went to China to write the Rough Guide, gained a pilot's license in Los Angeles, and crewed a sailing boat across the Atlantic (a story told in his book, Three Ways to Capsize a Boat). Everyone always wants to know if Chris and Ana are still living on their farm, El Valero. Of course they are! Along with numerous dogs, cats, chickens and sheep.