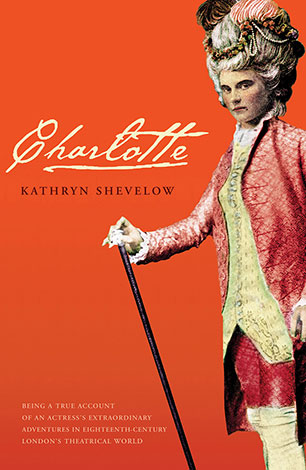 The actress who scandalised society by becoming a man to get what she wanted...

Eighteenth-century London was a theatre writ large: Fielding's satires mocked the Prime Minister, The Beggar's Opera drew raves, and riots broke out over duelling divas of the stage. Spectacle abounded: Aristocratic ladies paraded past fire-eaters, prostitutes, and public hangings. Mrs Mapp, the bone-setter, realigned butchers' kneecaps for happy crowds. Yet Charlotte was rarely overlooked. Every day of her life was a grand performance.

Born into the famous, sometimes scandalous, theatrical clan of Colley Cibber, Charlotte was an actress destined for greatness. But she would rebel, and started dressing as a man. When her father disowned her, her life became an adventure extending from the pinnacles of posh London to its dangerous depths. Kathryn Shevelow captures Charlotte - an artist, a survivor in all her guises, from her time among the leading lights of glamorous Drury Lane Theatre to her trials as a strolling player and puppeteer, to her comeback as author of one of the first autobiographies written by a woman.

A story of a woman's determination to be herself, Charlotte is a tale of pluck and perseverance set against the rich tapestry of a great city, the characters of its colourful theatre world, its history, and savage political battles.
More books by this author

A specialist in eighteenth-century British literature and culture, Kathryn Shevelow has been an award-winning professor at the University of California in San Diego for twenty years. She lives in Solana Beach, California.