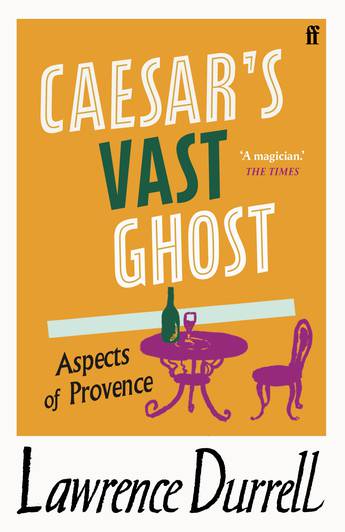 Lose yourself in this classic travelogue evoking the idyllic South of France by the king of travel writing and real-life family member of The Durrells in Corfu.

'A richly characteristic bouillabaisse by our last great garlicky master of the vanishing Mediterranean, our old Prospero of the south.' - Richard Holmes

Provence, Southern France. Celebrated writer and poet Lawrence Durrell made the Midi his home for more than thirty years: and in his final book, he shares his most evocative, dazzling memories of life as a local.

A seductive blend of travelogue, poet's notebook, and intimate autobiography, Durrell guides us through the rich layers of human history that lie beneath the region's legendary landscapes. From stories of magic and mythology infusing the rolling vineyards and vivid lavender fields to tales of Roman conquest, bull-worship, and courtly love beneath the wounded blue skies, Caesar's Vast Ghost is a classic memoir to be treasured.

'A virtuoso.' - New York Times
More books by this author

Lawrence Durrell was a British novelist, poet, dramatist, and travel writer. Born in 1912 in India to British colonial parents, he was sent to school in England and later moved to Corfu with his family - a period which his brother Gerald fictionalised in My Family and Other Animals - later filmed as The Durrells in Corfu - and which he himself described in Prospero's Cell. The first of Durrell's island books, this was followed by Reflections on a Marine Venus on Rhodes; Bitter Lemons, on Cyprus, which won the Duff Cooper Memorial Prize; and, later, The Greek Islands.