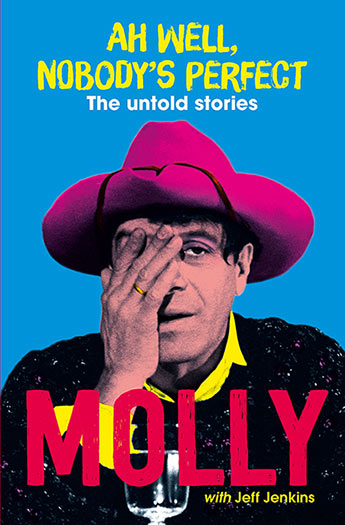 A book of hilarious real-life anecdotes from Molly Meldrum, one of Australia's best-loved personalities.

There was once a boy from Quambatook called Ian Meldrum, who moved to the big city, got a job in a bank, and then became Molly, a music legend, writing for Go-Set, producing 'The Real Thing' and providing the soundtrack to our lives on Countdown and Hey Hey It's Saturday.

It's a life where not everything has gone to plan, but Ah Well, Nobody's Perfect.

This book tells the funny, eye-opening and larger-than-life untold stories that happened along the way: the parties, the fights, the celebrity interviews, the madness and the music. Molly gives us his unforgettable encounters with The Beatles, Elton John, David Bowie, The Rolling Stones, Madonna, John Farnham, Bruce Springsteen, the Bee Gees, Rod Stewart, Russell Crowe, Oasis, Beyonce and Prince. As well as the tales that surround his other loves: the Australian cricket team, the St Kilda footy club and the Melbourne Storm.

No one has lived a life like Ian 'Molly' Meldrum. And no one can tell a story like Molly.
More books by this author

Ian 'Molly' Meldrum was born in 1943. Described as 'the single most important person in the Australian pop industry for 40 years', he is best known as the host, talent co-ordinator, on-air interviewer and music news presenter on Countdown from 1974-1987. He has also worked as music critic, journalist, musical entrepreneur and record producer. He hosted the Australian leg of Live Aid in July 1985 and was subsequently made a Member of the Order of Australia. Molly lives in Richmond, Victoria. He is a passionate supporter of both the St Kilda Football Club and The Melbourne Storm NRL team.