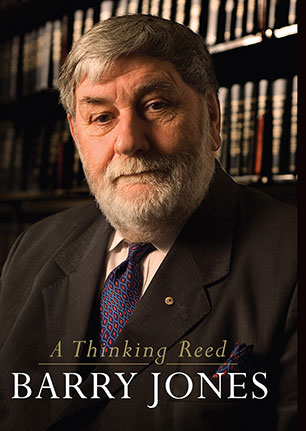 The life of an Australian polymath, a passionate advocate for Australia, a politician held in great affection by all sides of politics.

From quiz kid to Australian Minister for Science, from frustrated school teacher to National President of the ALP, from the suburbs of Melbourne to UNESCO in Paris, Barry Jones has had a prodigious public life.

Barry Jones first came to public prominence as Pick-a-Box quiz champion, and from then on he has embraced a myriad of passions and causes. A Thinking Reed spans his remarkable career, from a lonely childhood in Melbourne of the 1930s and 1940s to the fight he led against the death penalty to his crusade to make science and the future prominent issues on the political agenda. He has worked tirelessly on both a global and local scale to rethink education, to improve and preserve our heritage, to revive the nations's film industry, and to build a better Australia.

Almost unique among politicians, Barry Jones is held in enormous public affection. And while he reveals many insights into the political process - both the problems of office and the atrophy of Opposition - he concentrates above all on the life of the mind; a mind with deep, passionate and often witty insights into history, philosophy, music and literature. A Thinking Reed is a generous gift from an extraordinary Australian.

'A Thinking Reed is a book that works through accumulation and accretion . . . and in his requiem for contemporary politics, we reach the finale of what we now see has been a symphony, and one with Mahleresque intimations of tragedy'. - Australian Literary Review

'Barry Jones has written the best autobiography of a politician I have ever read'. - Don Aitkin, Canberra Historical Journal

'A Thinking Reed is a mixture of honesty, FUN, common sense and scholarship too. It makes a delightful portrait of a life. - Owen Chadwick, OM, historian

'It is breathtakingly ambitious, clear-eyed but generous about other people Rich and strange - like travelling with Gulliver as he discovers the world and himself in it . . . I don't often hanker for multi-volumed works, but I wished for more all the while I was reading this'. - The Age
More books by this author

The Hon. Dr Barry Jones is a writer, broadcaster and former Labor member of both the State and Federal parliaments. He was Australia's longest serving Science Minister (1983-90) and served as National President of the Australian Labor Party from 1992 to 2000 and again in 2005-06. He is the only person to have been elected as a Fellow of all four Australian learned academies: Technological Sciences and Engineering in 1992, the Humanities in 1993, Science in 1996 and Social Sciences in 2003. He was also a member of the Executive Board of UNESCO in Paris (1991-95), Vice-President of the World Heritage Committee (1995-96) and a consultant for the OECD. He now serves on six medical research board and the board of CARE Australia.

In 1998 he became a Living National Treasure and received a John Curtin Medal in 2001. Barry Jones Bay in the Australian Antarctic Territory and Yalkaparidon jonesi, a rare extinct family of marsupials, were named for him.