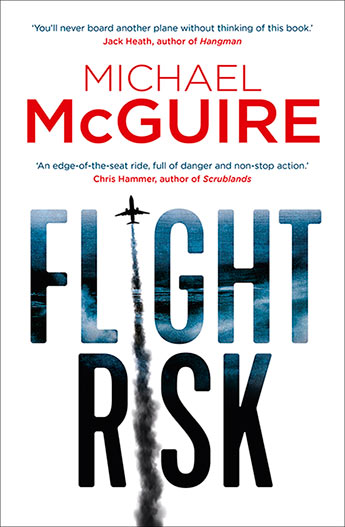 A gripping debut thriller full of pure adrenaline, explosive action and terrifying revelations that will keep even the most jaded reader glued to the pages and utterly engrossed.

'You'd better assume the brace position, because Flight Risk takes the airport thriller genre to a whole new level. With rock-solid research, a ripped-from-the-headlines plot and a stunningly dark twist halfway through, this is one mystery that will keep you guessing from take-off until touchdown. You'll never board another plane without thinking of this book.'


Disgraced former pilot Ted Anderson works for a top-secret government organisation set up to investigate terror-related incidents. Sent to Jakarta to find out as much as he can about the pilot of a vanished Garuda flight, he discovers a flight simulator in the pilot's apartment.

Another plane disappears from the sky. Then another. Three planes and hundreds of passengers and crew, vanished, without a trace. Panic is widespread and the world is teetering on the brink.

Still no one has come forward to claim responsibility.

At an eerily deserted JFK airport trying to get a flight back home, Ted witnesses a suspicious exchange between an airport cleaner and a nonchalant airline pilot. He follows the pilot to his destination: a Ukraine International Airlines flight, due to leave in an hour.

All his instincts tell Ted that this is the next plane to go down. But what on earth can he do? Take the flight and face almost certain death? Or fly back home and wait for the news headlines?

He does the unthinkable and gets on the plane.


More books by this author

Born in Glasgow in 1971, Michael McGuire moved to South Australia with his family at the age of 10.

Michael has worked as a journalist in Sydney and Adelaide for The Australian, The Sunday Mail and The Advertiser, with a couple of forays into the state and federal politics as an advisor.

Michael is married to Rachel and they have two children, Tom and Ruby. Never a True Word, his first novel, is a satire about politics and was published in March 2017 by Wakefield Press.