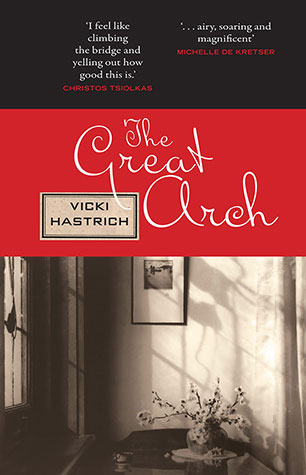 A deeply moving novel linking two centuries, two world wars and two generations inspired by the building of the Sydney Harbour Bridge - an epic story of faith, obsession and love and an ordinary man, an ordinary life, made grand.

In 1924 the planned and long-awaited Sydney Harbour Bridge represents an impossible ideal - to span the great waters of the harbour and take a war-scarred nation into a dazzling future. No one is more enthusiastic than Reverend Ralph Anderson Cage of Lavender Bay, whose imagination is seized by the scale of this thoroughly modern vision.

Ralph is a grand dreamer with all-too-human failings and in the Bridge, which he can see under construction from his Rectory verandah, he finds an obsession to last a lifetime. Sermons become paeans to the creative will of God - and the beauty of girders and pylons - and his parish papers wax lyrical about rivets and granite. But as he urges his long-suffering wife Stella, his children, his parishioners and the phlegmatic housekeeper Mrs Pessey to dream as big as he does, Ralph fails to notice those left behind by the bridge: the dispossessed families whose houses are destroyed in its path and the workers who lose their lives in accidents on its precarious heights. The Great Depression wears on, and the Bridge becomes a bitter reminder to his hungry parishioners of a promised prosperity that never comes. As Ralph invests everything in his obsession, the great arch he so loves and admires threatens to become his undoing.

Inspired by true people and events, and as open and colossal as the bridge itself, Vicki Hastrich's deeply moving novel links two centuries, two world wars and two generations. By turns wickedly funny and breathtakingly poetic, this is the story of an ordinary man, and an ordinary life, made grand.

'I gulped down The Great Arch in two long sittings, cancelling a coffee date because I didn't want to put it down. Hastrich had me hooked from the opening pages. . . I feel like climbing the bridge and yelling out how good it is.' Christos Tsiolkas, author of The Slap

'. . .a story of imagination, loneliness, obsession and love. . . A deeply tender, very funny and sad and beautiful book.' Charlotte Wood, author of The Children

'. . .as airy, soaring and magnificent as the bridge itself.' Michelle de Kretser, author of The Lost Dog

'Hastrich has given us an absorbing novel and an entrancing social history of inner Sydney, the fading relevance of the church in people's lives, and the sufferings caused by the Great Depression and World War II. After this, I will never again take the Sydney Harbour Bridge for granted.' Christina Hill, Australian Book Review
More books by this author

Vicki Hastrich was born in Sydney. Her first novel, Swimming with the Jellyfish, was published in 2001.