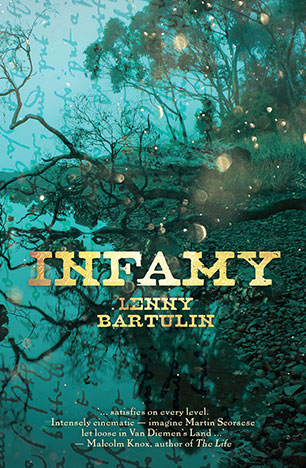 Kate Grenville meets Cormac McCarthy in a hugely enjoyable rollicking, literary western set in the most isolated and feared penal colony of the British Empire. A novel full of breathtaking action, cut-throat villains and corrupt and deadly officials, you'll never think of Tasmanian history in the same way again.

REWARD: Twenty gallons of Rum for the Delivery into My Custody of one Colonel George Bloody Arthur. The Reprobate's Offences include Fraudulently Impersonating a Lieutenant Governor. For I Am the TRUE George!

William Burr, the son of an English settler in South America, had a steady job hunting mahogany pirates in British Honduras. One day, injured and recovering after a jungle skirmish, he receives a letter from John McQuillan, his old friend and now Chief Police Magistrate in Hobart Town, with the offer of a reward for the capture of a notorious outlaw: and so Burr sets sail for the Antipodes, though with little idea of what to expect. He arrives in Van Diemen's Land, the most isolated and feared penal colony of the British Empire, in 1830 to find a world of corruption, brutality and mystical beauty. Following the trail of Brown George Coyne, the charismatic outlaw leader of a band of escaped convicts, Burr is soon rushing headlong through the surreal, mesmerising Vandemonian wilderness, where he will discover not only the violent truth of British settlement, but also the love of a woman, and the friendship of an Aboriginal tracker, himself an outcast on an island of outcasts.

A brilliant and beguiling Australian Western by a writer of astonishing talent. Visceral, phantasmagoric, explosive and exhilarating - you have never read anything like it.
More books by this author

Lenny Bartulin is the author of the Jack Susko trilogy and a published poet. Born and bred in Hobart, he is currently living in the Blue Mountains.