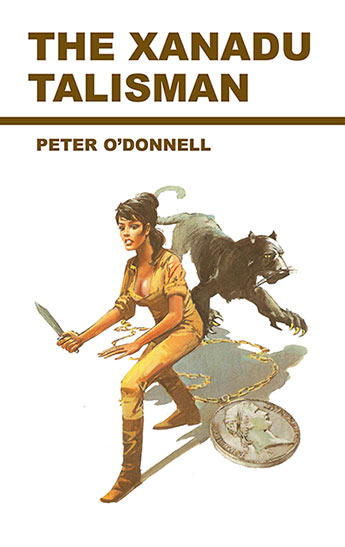 In this classic return we see Modesty both at her most feminine and at her toughest.

Trapped in an earthquake disaster with a dying man, she makes a promise that is to lead her and her faithful friend Willie Garvin into the most perilous crisis of their careers. Their quest takes them from Tangier to Paris, from the Riviera to Corsica, and finally to a stronghold in the heart of the Atlas Mountains, their every move observed and manipulated by El Mico, the most notorious and dangerous criminal genius in the Mediterranean. Unknown to Modesty, she holds a secret that El Mico covets above all else, and she is brought to a final confrontation with death in the stronghold of Xanadu.

As in all the Modesty Blaise stories, this book is peopled with a host of eccentric characters: the engaging Dr. Giles Pennyfeather, Modesty's devoted friend, and her opponents Little Krell, a prodigy in combat, the Silk brothers, juvenile adults who deal in death, and the astonishing Nanny Prendergast.
More books by this author

Peter O'Donnell began his career working on several major pre-war comics, Tiger Tim, Chips and Captain Moonlight. During the 1950s he became involved in strip cartoons and eventually created his revolutionary Modesty Blaise, syndicated in more than 42 countries. The strip led to a series of bestselling novels about Modesty and her faithful lieutenant, Willie Garvin, all published by Souvenir Press: Modesty Blaise, Sabre Tooth, I, Lucifer, The Impossible Virgin, Pieces of Modesty, A Taste for Death, The Silver Mistress, Dragon's Claw, The Xanadu Talisman, The Night of the Morningstar, Dead Man's Handle and his most recent collection Cobra Trap.