The Night of the Morningstar 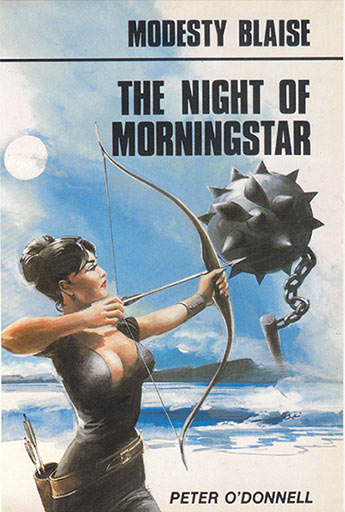 This tenth book of the Modesty Blaise pulp fiction series finds the heroine drawn into conflict with the mysterious group known as the Watchmen, who have plans to destroy the Golden Gate Bridge.

Modesty Blaise is about to retire from her criminal empire, the Network. But there is one final, astounding mission before she can leave.

Years later, she faces the consequences of this final mission when she is drawn into conflict with a mysterious group called 'The Watchmen'. Is the plan to destroy the Western world being orchestrated by the Watchmen?

There have been few other female action heroines like Modesty Blaise, a tough orphan who became the leader of the Network, a crime syndicate specializing in art theft and industrial espionage. This 10th book of her adventures begins with a flashback to the last days of the Network, when Modesty was about to retire, and describes the organization s final, astonishing operation before it disbanded. This operation is echoed several years later when Modesty, with her peerless lieutenant Willie Garvin, finds herself drawn into conflict with the mysterious group known as the Watchmen, who have plans to kill Modesty in London and then destroy San Francisco s Golden Gate bridge.

Modesty and Willie find themselves prisoners on a drillship off the Ilhas Desertas and must use their resourcefulness to escape.
More books by this author