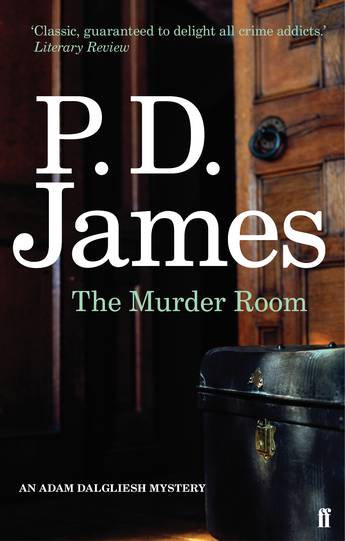 When Commander Dalgliesh is persuaded by an old friend to visit the Dupayne, a small private museum on the edge of Hampstead Heath, he can have no idea that he will return to it one week later under very different circumstances. One of the family trustees has been horribly murdered and Dalgliesh and his team are called in to investigate a death which, from the first, is fraught with complications. Even before the murder, the museum was in tumult. A new lease is due to be signed and two of the trustees are determined to keep the museum open, the third passionately determined on its closure.

The museum is dedicated to the years 1919-1939 and one of the galleries, the Murder Room, displays exhibits from the most notorious cases of those inter-war years. And now a modern killer is at work, the crimes uncannily echoing the cases on display. All the small group of people, the trustees, staff and volunteers, who work in the Dupayne, have the means and the opportunity for murder. One of them has the ruthlessness to kill and kill again.

The investigation is complicated for Dalgliesh by his love for Emma Lavenham, but their relationship, at a sensitive stage for them both, is continually frustrated by the demands of his job. As step by step he moves closer to the murderer, is the investigation taking him further away from commitment to the woman he loves?
More books by this author

P. D. James was born in Oxford in 1920 and educated at Cambridge High School for Girls. From 1949 to 1968 she worked in the National Health Service and subsequently in the Home Office, first in the Police Department and later in the Criminal Policy Department. All that experience has been used in her novels. She is a Fellow of the Royal Society of Literature and of the Royal Society of Arts and has served as a Governor of the BBC, a member of the Arts Council, where she was Chairman of the Literary Advisory Panel, on the Board of the British Council, and as a magistrate in Middlesex and London. She is an Honorary Bencher of the Honourable Society of the Inner Temple. She has won awards for crime writing in Britain, America, Italy and Scandinavia, including the Mystery Writers of America Grandmaster Award and the National Arts Club Medal of Honor for Literature (US). She has received honorary degrees from seven British universities, was awarded an OBE in 1983, and was created a life peer in 1991. In 1997 she was elected President of the Society of Authors. She lives in London and Oxford and has two daughters, five grandchildren and eight great-grandchildren.