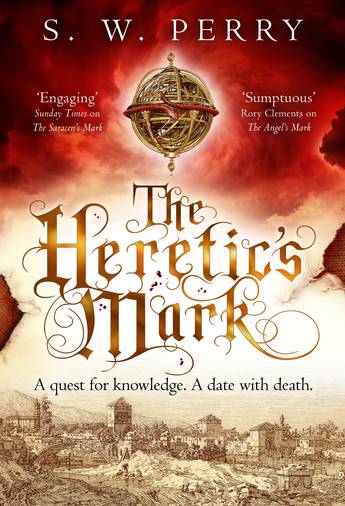 The fourth in the thrilling, bestselling Elizabeth crime series from S. W. Perry takes hero Nicholas Shelby and his new wife to Padua, where danger follows with every turn.

From the bestselling, CWA Historical Dagger Award-nominated author of The Angel's Mark (2019) and The Serpent's Mark (2020)

The Elizabethan world is in flux. Radical new ideas are challenging the old. But the quest for knowledge can lead down dangerous paths...

London, 1594. The Queen's physician has been executed for treason, and conspiracy theories flood the streets. When Nicholas Shelby, unorthodox physician and unwilling associate of spymaster Robert Cecil, is accused of being part of the plot, he and his new wife Bianca must flee for their lives.

With agents of the Crown on their tail, they make for Padua, following the ancient pilgrimage route, the Via Francigena. But the pursuing English aren't the only threat Nicholas and Bianca face. Hella, a strange and fervently religious young woman, has joined them on their journey. When the trio finally reach relative safety, they become embroiled in a radical and dangerous scheme to shatter the old world's limits of knowledge. But Hella's dire predictions of an impending apocalypse, and the brutal murder of a friend of Bianca's forces them to wonder: who is this troublingly pious woman? And what does she want?
More books by this author

S. W. Perry was a journalist and broadcaster before retraining as an airline pilot. He lives in Worcestershire with his wife.