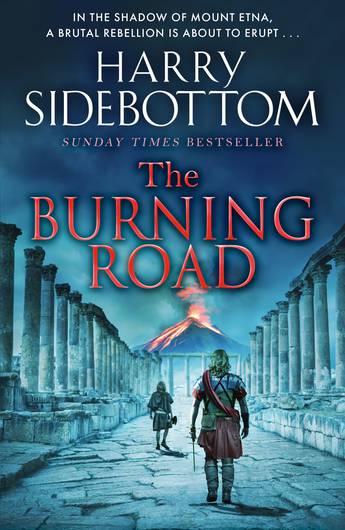 AD265 - In the shadow of Mount Etna, slaves are rising up. As the rebel leader declares Sicily the new land of the free, men and women are slaughtered, and cities across the island are sacked and burned.

When a ship is wrecked off the island's west coast, all but two survivors are cut down in the surf by the rebel slaves. Ballista, an experienced Roman soldier, has always found a way to survive against the odds - but his son Marcus is still just a boy.

With the burning road stretching out ahead of them, father and son must cross the war-ravaged island in a race against time to save the rest of his family, and somehow find a way to extinguish the brutal rebellion, before it all goes up in flames.
More books by this author

Harry Sidebottom teaches Ancient History at Oxford University. His career as a novelist began with his Warrior of Rome series, which has sold over half a million copies. His next series, Throne of Caesars, was equally acclaimed. The Last Hour, his tenth novel, introduced us once again to Marcus Clodius Ballista, hero of the Warrior of Rome books. The Lost Ten is his eleventh novel.