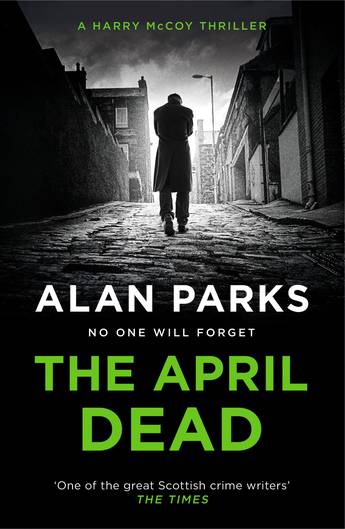 McCoy must contend with a bombing spree across his home city in this fourth dark and gritty Harry McCoy thriller.

NO ONE WILL FORGET

In a grimy flat in Glasgow, a homemade bomb explodes, leaving few remains to identify its maker.

Detective Harry McCoy knows in his gut that there'll be more to follow. The hunt for a missing sailor from the local US naval base leads him to the secretive group behind the bomb, and their disturbing, dominating leader. If the city is to survive the next explosion, it'll take everything McCoy's got . . .
More books by this author More books in this series

Alan Parks worked in the music industry for twenty years before turning to crime writing, commissioning videos, photography and artwork for household names including New Order, All Saints, The Streets and Enya. His debut novel Bloody January was shortlisted for the Grand Prix de Litterature Policiere. February's Son was nominated for an Edgar Award and The April Dead was shortlisted for The McIlvanney Prize for Scottish Crime Book of the Year. He lives and works in Glasgow.

The April Dead is the fourth Harry McCoy thriller.