I Hear the Sirens in the Street 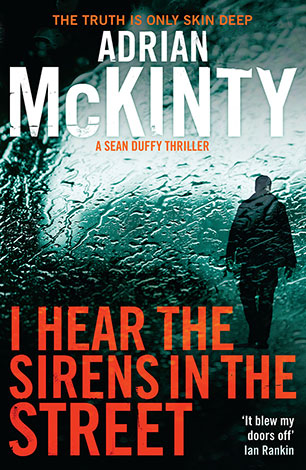 Sean Duffy knows there's no such thing as a perfect crime. But a torso in a suitcase is pretty close.

Still, one tiny clue is all it takes, and there it is. A tattoo. So Duffy, fully fit and back at work after the severe trauma of his last case, is ready to follow the trail of blood - however faint - that always, always connects a body to its killer.

A legendarily stubborn man, Duffy becomes obsessed with this mystery as a distraction from the ruins of his love life, and to push down the seed of self-doubt that he seems to have traded for his youthful arrogance.

So from country lanes to city streets, Duffy works every angle. And wherever he goes, he smells a rat .
More books by this author More books in this series

Adrian McKinty grew up in Carrickfergus, Northern Ireland. After studying at Oxford University he moved to New York City, working in bars, bookstores, building sites and finally the basement stacks of the Columbia University Medical School Library. In 2000 he relocated to Denver, Colorado where he taught high school English and began writing fiction. His debut Dead I Well May Be was shortlisted for the Ian Fleming Steel Dagger Award and his most recent novel Fifty Grand won the 2010 Spinetingler Award. In 2009 Adrian moved to Melbourne, Australia with his wife and two children.