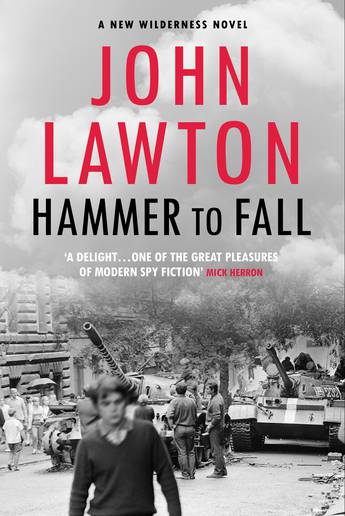 The third Joe Wilderness spy thriller from a master of the genre, moving from icy Finland to tumultuous Cold War Prague, Hammer to Fall is a tale of vodka smuggling and a legendary female Red Army general who is playing a dangerous game.

It's London, the swinging sixties, and by rights MI6 spy Joe Wilderness should be having as good a time as James Bond. But alas, in the wake of an embarrassing disaster for MI6, Wilderness has been posted to remote northern Finland in a cultural exchange program to promote Britain abroad. Bored by his work, with nothing to spy on, Wilderness finds another way to make money: smuggling vodka across the border into the USSR. He strikes a deal with old KGB pal Kostya, who explains to him there is a vodka shortage in the Soviet Union - but there is something fishy about Kostya's sudden appearance in Finland and intelligence from London points to a connection to cobalt mining in the region, a critical component in the casing of the atomic bomb. Wilderness's posting is getting more interesting by the minute, but more dangerous too.

Moving from the no-man's-land of Cold War Finland to the wild days of the Prague Spring, and populated by old friends (including Inspector Troy) and old enemies alike, Hammer to Fall is a gripping tale of deception and skullduggery, of art and politics, a page-turning story of the always riveting life of the British spy.

'It's a blast...all the elements coalesce for the superbly tense showdown' - The Times
More books by this author

John Lawton worked for Channel 4 for many years, and, among many others, produced Harold Pinter's O Superman, the least-watched most-argued-over programme of the 90s. He has written eight novels in the Inspector Troy series, three Joe Wilderness novels, the standalone Sweet Sunday, a couple of short stories and the occasional essay. He writes very slowly and almost entirely on the hoof in the USA or Italy, but professes to be a resident of a tiny village in the Derbyshire Peak District.