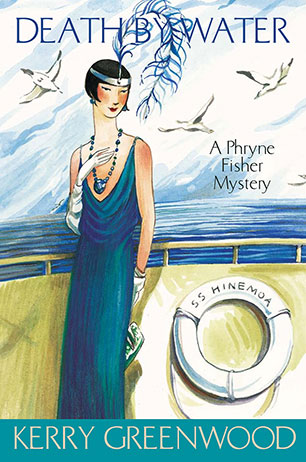 Who are you?' asked the doctor. You are not the standard cruise passenger, I can tell you that.'

Thank you,' said Phryne in a self-possessed manner. You are correct. I am a lot of things, some of which do not concern you, but mostly I am Phryne Fisher.'

The nice men at P+O are worried. A succession of jewellery thefts from first class passengers is hardly the best advertisement for their cruise liners, particularly when it is likely that it is a passenger who is doing the stealing.

Phryne Fisher, with her Lulu bob, green eyes, Cupid's bow lips and Chanel travelling suits, is exactly the sort of elegant sleuth to take on a ring of jewellery thieves aboard the high seas - or at least, aboard the SS Hinemoa on a luxury cruise to New Zealand. With the Maharani - the Great Queen of Sapphires - as the bait, Phryne rises magnificently to the challenge.

Greenwood's prose has a dagger in its garter.' Graeme Blundell, The Australian
More books by this author More books in this series

Kerry Greenwood is the author of twenty-seven novels and the editor of two collections. Previous novels in the Phryne Fisher series are Cocaine Blues, Flying too High, Murder on the Ballarat Train, Death on the Victoria Dock, Blood and Circuses, The Green Mill Murder, Ruddy Gore, Urn Burial, Raisins and Almonds, Death Before Wicket, Away with the Fairies, Murder in Montparnasse, The Castlemaine Murders and Queen of the Flowers. She is also the author of several books for young adults and the Delphic Women series.

When she is not writing she is an advocate in Magistrates' Court for the Legal Aid Commission. She is not married, has no children and lives with a registered Wizard.