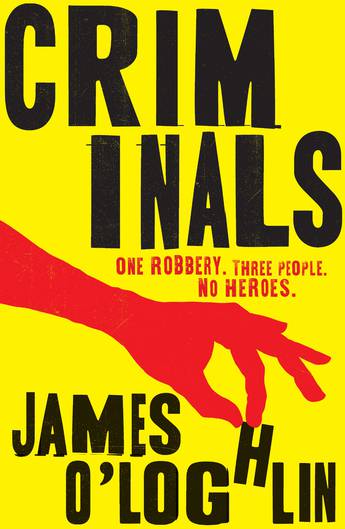 One robbery. Three people. No heroes. Much loved ABC presenter James O'Loghlin's novel explores why and how ordinary people turn to crime.

What makes a criminal? One May 2019 morning, two masked gunmen rob Blacktown Leagues Club. What happens next will change the lives of three people. Twenty-three-year-old Dean Acton is a heroin addict trying to get off the break and enter treadmill by pulling one big job. Sarah Hamilton, also twenty-three, is a police officer on stress leave, working behind the bar, trying to forget the mistake she made that caused the death of her fiancée. Mary Wallace, a forty-five-year-old ex-schoolteacher who lives and drinks alone, feels that her life is already over, and has made plans to formalise that arrangement.

When Sarah realises there is something familiar about one of the gunmen, she is drawn back to the thrill of investigating, and can identify Dean. Dean is overjoyed at his $12,000 haul, but before he can decide whether to spend it on a new start in Queensland or a few months' worth of heroin, he's arrested, and in Long Bay jail everyone wants to find out where he's stashed the cash.

Mary is inspired by the robbery. Pottery and French classes haven't jolted her out of her depression, but perhaps embarking on a life of crime will. She starts small, and then ups the ante. When she, too, is arrested and her lawyer tries to discover why a respectable middle-class woman would steal constipation medication, will she be able to reveal what caused her to give up on teaching and everything else?
Dean learns that the only person who identified him at the robbery was Sarah and is tempted by a plan that will ensure she won't ever be able to give evidence against him. But is he prepared to go that far? And if he does, will he ever come back?

As Dean's trial approaches, Mary, Dean and Sarah must work out why they have become who they are, and whether they have the courage to change.
More books by this author

James O'Loghlin is a comedian, television and radio host, and author of ten books, including six novels for children (which have been nominated for, and won, four awards), and four non-fiction books (which haven't). James began his career as a corporate lawyer in 1991, quickly realised it wasn't for him, and changed course to become both a criminal lawyer and a stand-up comedian. He performed all over Australia (as a comedian, not a lawyer) including at four Melbourne International Comedy Festivals. He has won the Variety award for Best Australian Comedy Performer. James has hosted four televisions shows, including The New Inventors on ABC-TV from 2004 to 2011, and hosted award-winning radio programmes on ABC Local Radio from 2000 to 2014. James was a script editor for Kitty Flanagan's ABC-TV comedy, Fisk. In 2021 his first play, Television, was shortlisted for The Rodney Seaborn Playwrights Award and Highly Commended by The Silver Gull Play Award. However, the award he is most proud of was conferred on him by his fellow comedians, The Year's Best Comeback to a Heckler.