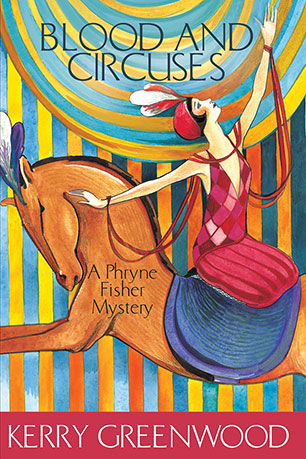 Phryne Fisher goes to the circus for her sixth mystery. Stripped of her identity and wealth, it's only Phryne's keen wit and sharp thinking that will help her now.

The Honourable Miss Phryne Fisher is feeling dull. But is she bored enough to leave her identity, her home and family behind and join Farrell's Circus and Wild Beast Show? There have been strange things happening at the circus. And when Phryne is asked by her friends Samson the Strong Man, Alan the carousel operator and Doreen the Snake Woman to help them, curiosity gets the better of her.

Peeling off her wealth and privilege, Phryne takes a job as a trick horse-rider, wearing hand-me-down clothes and a new name. Someone seems determined to see the circus fail and Phryne must find out who that might be and why they want it badly enough to resort to poison, assault and murder.

Diving into the dangerous underworld of 1920s Melbourne and the wild, eccentric life under the big top, Phryne proves her courage and ingenuity yet again, aided only by her quick intelligence, an oddly attractive clown, and a stout and helpful bear.

Phryne Fisher is the souffle course of the gourmet detective dinner. A consummately light and airy confection which entrances the moment and sweetly vanishes, it is the evanescent product of considerable artistry.' Katherine England, Adelaide Advertiser
More books by this author More books in this series

Kerry Greenwood is the author of twenty-seven novels and the editor of two collections. Previous novels in the Phryne Fisher series are Cocaine Blues, Flying too High, Murder on the Ballarat Train, Death at Victoria Dock, The Green Mill Murder, Ruddy Gore, Urn Burial, Raisins and Almonds, Death Before Wicket, Away with the Fairies, Murder in Montparnasse, The Castlemaine Murders and Queen of the Flowers. She is also the author of several books for young adults and the Delphic Women series.

When she is not writing she is an advocate in Magistrates' Court for the Legal Aid Commission. She is not married, has no children and lives with a registered Wizard.