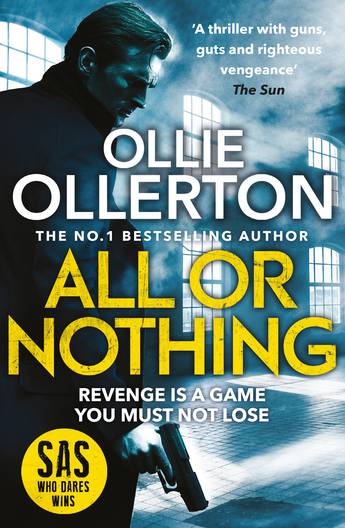 The new Alex Abbott thriller from the No.1 bestselling author

THE NEW THRILLER FROM THE NUMBER 1 BESTSELLING AUTHOR

Revenge is a game you can't afford to lose...

They say blood is thicker than water. They never mention alcohol. Ex-special forces soldier Alex Abbott has a lead on the killer of his dead brother, if only he can stay off the booze long enough to hunt it down. But the skeletons in Abbott's closet are mounting up faster than the bodies in their bags, and Abbott needs to get his focus back if he's going to get his revenge.

His pursuit takes him to the North of England, where Abbott infiltrates a local gang, forced to carry out jobs to maintain his cover. As he gains their trust he ventures deeper into the organisation uncovering a long-established international network of rich, depraved thrill-seekers, with a sadistic side-hustle in child trafficking.

Can Abbott stay ahead of his quarry and keep those who matter to him safe? The answer will take Abbott into Eastern Europe and a deadly game of cat and mouse, where he will face a terrible choice between his past and his future; it's winner takes all and Abbott has everything to lose.

Praise for the Alex Abbott Series:
'Crisp, brisk and powerful'
- Financial Times
'Enough to put Bond and Bourne to shame'
- The Sun
'Authentic and gritty'
- Heat Magazine
'An adrenaline-fuelled thriller with a flawed, relatable hero'
- Culturefly
More books by this author

Matthew 'Ollie' Ollerton is a Sunday Times no. 1 bestselling author and a former Special Forces soldier, who was one of the founding Directing Staff on Channel 4's hit show SAS: Who Dares Wins and SAS Australia.

Ollie's military career began at the age of 18 when he joined the Royal Marine Commandos and toured operationally in Northern Ireland and in Iraq for Operation Desert Storm. He subsequently spent six years in the Special Boat Service rising to team leader, before working in Iraq as a private security contractor and carrying out anti-child-trafficking charity work in Southeast Asia. These experiences helped shape his life as well as his books.

Ollie is the founder of Breakpoint, the business he runs as part of his mission to help others create more productive, healthier, and happier lives. He furthers this passion through his writing and his online, virtual and public appearances.