Home>Browse>Books>Fiction>We Are All Completely Beside Ourselves

We Are All Completely Beside Ourselves 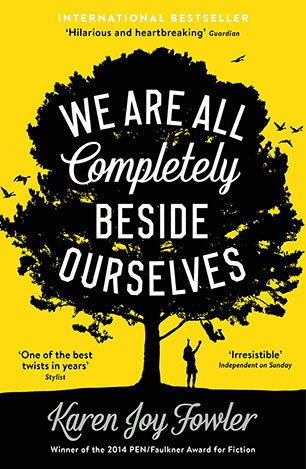 Shortlisted for the Man Booker Prize 2014

By the author of worldwide bestseller The Jane Austen Book Club: you can't choose your family, but they can make choices for you. Big, life-defining choices. Winner of the 2014 PEN/Faulkner Award for Fiction.

Rosemary's young, just at college, and she's decided not to tell anyone a thing about her family. So we're not going to tell you too much either: you'll have to find out for yourselves, round about page 77, what it is that makes her unhappy family unlike any other.
Rosemary is now an only child, but she used to have a sister the same age as her, and an older brother. Both are now gone - vanished from her life. There's something unique about Rosemary's sister, Fern. And it was this decision, made by her parents, to give Rosemary a sister like no other, that began all of Rosemary's trouble. So now she's telling her story: full of hilarious asides and brilliantly spiky lines, it's a looping narrative that begins towards the end, and then goes back to the beginning. Twice.

It's funny, clever, intimate, honest, analytical and swirling with ideas that will come back to bite you. We hope you enjoy it, and if, when you're telling a friend about it, you do decide to spill the beans about Fern - it's pretty hard to resist - don't worry. One of the few studies Rosemary doesn't quote says that spoilers actually enhance reading.
More books by this author

Karen Joy Fowler is the author of six novels and three short story collections. The Jane Austen Book Club spent thirteen weeks on the New York Times bestsellers list and was a New York Times Notable Book. Fowler's previous novel, Sister Noon, was a finalist for the 2001 PEN/Faulkner Award for fiction. Her debut novel, Sarah Canary, was a New York Times Notable Book, as was her second novel, The Sweetheart Season. Fowler's short story collection Black Glass won the World Fantasy Award in 1999, and her collection What I Didn't See won the World Fantasy Award in 2011. We Are All Completely Beside Ourselves won the 2014 PEN/Faulkner Award for Fiction. Fowler and her husband, who have two grown children and five grandchildren, live in Santa Cruz, California.