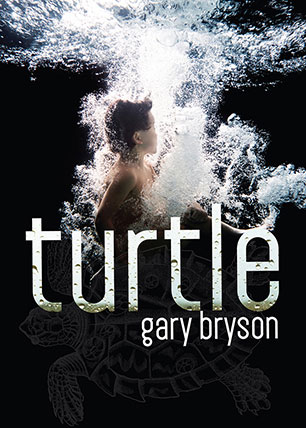 Set in Glasgow, Turtle is a blackly comic and compulsively enjoyable story about young Donald, who goes in search of his inner turtle. 'Turtle is one of the finest debut novels I've read in years. Bryson's storytelling is, quite simply, enchanting.' Mandy Sayer

So, to get to the point, if it's a ripping yarn you're after you should give up now. Just put the damned book down and find something more satisfying, a love story perhaps, or a thriller. A story where the goodies win and the baddies get what they deserve. Because there are no goodies here, just me, my family, and a turtle that speaks with a Glasgow accent. In other words, complete and utter shite. Or, as I prefer to see it, the truth. Because sometimes they're both the same thing, truth and lies. And you can't have one without the other, can you?

Set in a bleak and rain-bedrizzled Glasgow, this is the story of Donald Pinelli, whose mother Trixie is not only mad, she's psychic too - not a good combination, especially when it means she's convinced Donald is cursed to die by drowning on his eighteenth birthday. As if that it isn't enough, Donald has to contend with a gangster father, siblings who hate him and a best friend who betrays him. Life's mince, and no mistake. But an unexpected encounter with a cantankerous turtle in a rundown zoo abruptly sets young Donald on a crash course in survival.

Years later, Trixie's death brings an older but not much wiser Donald back to Glasgow - to attend her funeral, sort through his childhood memories, come to terms with his failures, and maybe, who knows, forge a new life for himself without his carapace of bitterness and resentment.

A novel of great and gritty charm, this is an eccentric, bittersweet and defiant story about family, fate and the slipperiness of truth, with a hero - and a turtle - you will never forget.
More books by this author

Gary Bryson is Glaswegian who has lived in Sydney for 20 years. He's a journalist with Radio National producing and presenting features and docos for the 'Encounter' series. Previous to that he was executive producer on 'Late Night Live' with Phillip Adams.