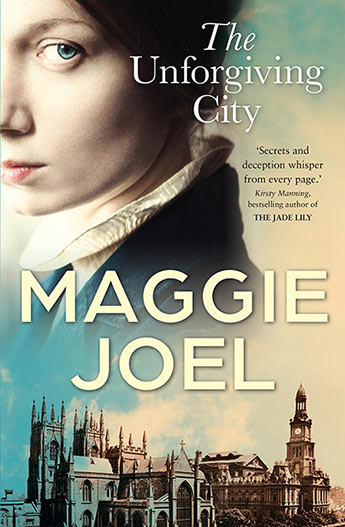 Secrets and lies throw three lives into chaos in the last days of the nineteenth century.

'If you love Australian history combined with a gripping saga, The Unforgiving City is an excellent read.' - The Weekly Times

Colonial Sydney in the final weeks of the nineteenth century: a city striving for union and nationhood but dogged by divisions so deep they threaten to derail, not just the Federation, but the colony itself. There are chasms opening too when a clandestine note reaches the wrong hands in the well-to-do household of aspiring politician Alasdair Dunlevy and his wife Eleanor. Below stairs, their maid Alice faces a desperate situation with her wayward sister.

Despite sharing a house, Eleanor, Alice and Alasdair are each alone in their torment and must each find some solution, but at what cost to themselves and those they love? Evocative, immediate and involving, this is the sweeping story of three people, their passions and ambitions, and the far-flung ripples their choices will cause.
More books by this author

Maggie lives in Sydney and works as the operations manager at a federal government agency.

The Unforgiving City Chapte... by Allen & Unwin on Scribd