The Town that Drowned 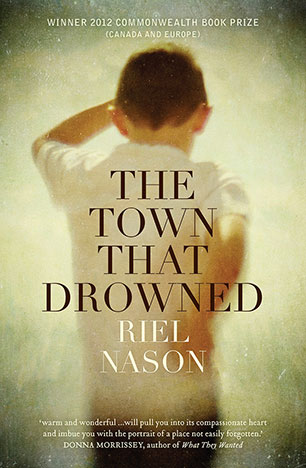 When fourteen-year-old Ruby Carson takes a tumble through the ice she nearly drowns. Coming to, she has a vision of her town under water that she shares with the assembled crowd. Already something of an oddity, the vision solidifies her status as an outcast. But as it turns out, she was right . . . A tender, funny and charming coming-of-age tale that will steal your heart.

Living with a weird brother in a small town can be tough enough. Having a spectacular fall through the ice at a skating party and nearly drowning are grounds for embarrassment. But having a vision and narrating it to the assembled crowd solidifies your status as an outcast.

What Ruby Carson saw during that fateful day was her entire town, buildings and people floating underwater. Then an orange-tipped surveyor stake turns up in a farmer's field. Another is found in the cemetery. A man with surveying equipment is spotted eating lunch near Pokiok Falls. The residents of Haverton soon discover that a massive dam is being constructed and that most of their homes will be swallowed by the rising water.

Suspicions mount, tempers flare, and secrets are revealed. As the town prepares for its own demise, 14-year-old Ruby Carson sees it all from a front-row seat. Set in the 1960s, The Town That Drowned evokes the awkwardness of childhood, the thrill of first love, and the importance of having a place to call home. Award-winning writer Riel Nason's keen insights into human nature and the depth of human attachment to place make this novel ripple in an amber tension of light and shadow.

Riel Nason's short fiction has appeared in The Antigonish Review, The Malahat Review, Grain and The Dalhousie Review among others. In 2005, she was awarded the David Adams Richards Prize for a collection of short fiction from the Writers' Federation of New Brunswick, adding to the three other short fiction prizes she's earned from the WFNB. She lives in New Brunswick, Canada.

Riel Nason - The Town That Drowned (Extract) by Allen & Unwin