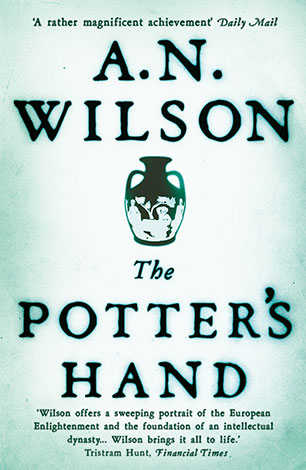 A novel of epic scope, rich in warmth, intellect and humanity, The Potter's Hand explores the lives and loves of one of Britain's greatest families, whose travails are both ordinary - births, deaths, marriages, opium addiction, depression - and utterly extraordinary.

In 1774, Josiah Wedgwood, master craftsman possessed with a burning scientific vision, embarks upon the thousand piece Frog Service for Catherine the Great. Josiah's nephew Tom journeys to America to buy clay from the Cherokee for this exquisite china. Tom is caught up in the American rebellion, and falls for a Cherokee woman who will come to play a crucial role in Josiah's late, great creation: the Portland Vase. As the family fortune is made, and Josiah's entrepreneurial brilliance creates an empire that will endure for generations, it is his daughter Sukey, future mother of Charles Darwin, who bears clear-eyed witness.
More books by this author

A. N. Wilson grew up in Staffordshire, where his father was Managing Director of Josiah Wedgwood & Sons. He was educated at Rugby and New College, Oxford. A Fellow of the Royal Society of Literature, he holds a prominent position in the world of literature and journalism. He is a prolific and award-winning biographer and celebrated novelist. His most recent novel, Winnie and Wolf, was longlisted for the 2007 Man Booker Prize. He lives in North London.