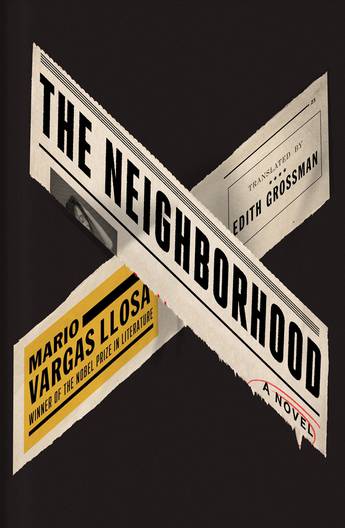 A thrilling tale of desire and Peruvian corruption from the world-renowned Nobel Laureate.

One day Enrique, a high-profile businessman, receives a visit from Rolando Garro, the editor of a notorious magazine that specializes in salacious exposes. Garro presents Enrique with lewd pictures from an old business trip and demands that he invest in the magazine. Enrique refuses, and the next day the pictures are on the front page. Meanwhile, Enrique's wife is in the midst of a passionate and secret affair with the wife of Enrique's lawyer and best friend. When Garro shows up murdered, the two couples are thrown into a whirlwind of navigating Peru's unspoken laws and customs, while the staff of the magazine embark on their greatest expose yet.

Ironic and sensual, provocative and redemptive, the novel swirls into the kind of restless realism that has become Mario Vargas Llosa's signature style. A twisting, unpredictable tale, The Neighborhood is at once a scathing indictment of Fujimori's regime and a crime thriller that evokes the vulgarity of freedom in a corrupt system.
More books by this author

Mario Vargas Llosa was awarded the Nobel Prize in Literature in 2010 'for his cartography of structures of power and his trenchant images of the individual's resistance, revolt, and defeat.' He has also won the Cervantes Prize, the Spanish-speaking world's most distinguished literary honor. His many works include The Discreet Hero, The Feast of the Goat, The Bad Girl, and Aunt Julia and the Scriptwriter, all published by Faber.

Edith Grossman has translated the works of the Nobel laureates Mario Vargas Llosa and Gabriel Garcia Marquez, among others. Her version of Miguel de Cervantes's Don Quixote is considered the finest translation of the Spanish masterpiece in the English language.