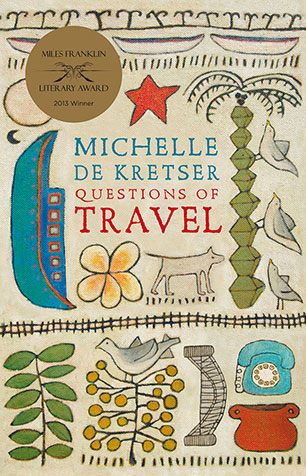 Questions of Travel is a dazzling, compassionate and deeply moving novel from one of world literature's rising stars.

Winner of the 2013 Miles Franklin Award

A mesmerising literary novel, Questions of Travel charts two very different lives. Laura travels the world before returning to Sydney, where she works for a publisher of travel guides. Ravi dreams of being a tourist until he is driven from Sri Lanka by devastating events.

Around these two superbly drawn characters, a double narrative assembles an enthralling array of people, places and stories - from Theo, whose life plays out in the long shadow of the past, to Hana, an Ethiopian woman determined to reinvent herself in Australia.

Award-winning author Michelle de Kretser illuminates travel, work and modern dreams in this brilliant evocation of the way we live now. Wonderfully written, Questions of Travel is an extraordinary work of imagination - a transformative, very funny and intensely moving novel.

Praise for The Lost Dog:

'This is the best novel I have read in a long time.' - AS Byatt

'a beautiful piece of writing - place your bets now for the Booker.' - Kate Saunders, The Times

Praise for The Hamilton Case:

'one of the most remarkable books I've read in a long while - subtle and mysterious, both comic and eerie, and brilliantly evocative of time and place. I've never been to Sri Lanka but I feel it's become part of my interior landscape, and I so much admire Michelle de Kretser's formidable technique - her characters feel alive, and she can create a sweeping narrative which encompasses years, and yet still retain the sharp, almost hallucinatory detail. It's brilliant. (Booker judges, where were you?)' - Hilary Mantel, author of Wolf Hall
More books by this author

Michelle de Kretser was born in Sri Lanka and emigrated to Australia when she was 14. Educated in Melbourne and Paris, Michelle has worked as a university tutor, an editor and a book reviewer. She is the author of The Rose Grower , The Hamilton Case, which won the Commonwealth Prize (SE Asia and Pacific region) and the UK Encore Prize, and The Lost Dog, which was widely praised by writers such as AS Byatt, Hilary Mantel and William Boyd and won a swag of awards, including: the 2008 NSW Premier's Book of the Year Award and the Christina Stead Prize for Fiction, and the 2008 ALS Gold Medal. The Lost Dog was also shortlisted for the Vance Palmer Prize for Fiction, the Western Australian Premier's Australia-Asia Literary Award, the Commonwealth Writers' Prize (Asia-Pacific Region) and Orange Prize's Shadow Youth Panel. It was longlisted for the Man Booker Prize and the Orange Prize for Fiction.