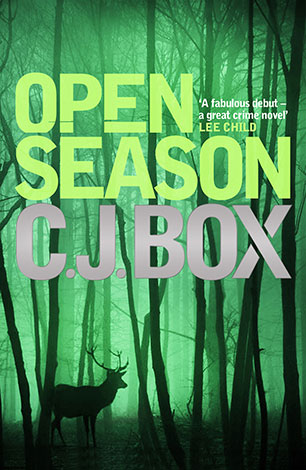 The first in the Joe Pickett series by award-winning author C.J. Box.

Joe Pickett has moved his wife and family to Twelve Sleep, Wyoming, a town where everyone loves to hunt and so as the new game warden, and one who refuses to look the other way, he is far from popular. When he finds a local hunting outfitter dead, splayed out on the woodpile behind his state-owned home, he takes it personally. There had to be a reason that the outfitter, with whom he's had run-ins before, chose his backyard, and his woodpile to die in. After the discovery of two more bodies the outfitter murders, are quickly solved, but Joe, uneasy with the easy explanation offered by the local police, continues to investigate.

Digging deeper into the murders, he soon discovers that the outfitter brought more than death to his backdoor: an endangered species, thought to be extinct, is now living in his woodpile. If word of its existence gets out, it will destroy any chance of InterWest, a multi-national natural gas company, building an oil pipeline that would bring the company billions of dollars across Wyoming, through the mountains and forests of Twelve Sleep.

The closer Joe comes to the truth behind the outfitter murders, the endangered species and InterWest, the closer he comes to losing everything he holds dear.
More books by this author More books in this series

C.J. Box is the winner of the Anthony Award, Prix Calibre 38 (France), the Macavity Award, the Gumshoe Award, the Barry Award and the Edgar Award (twice) and is also a L.A. Times Book Prize finalist. His novels are US bestsellers and have been translated into 21 languages. Box lives with his family outside Cheyenne, Wyoming. Visit his website at www.cjbox.net