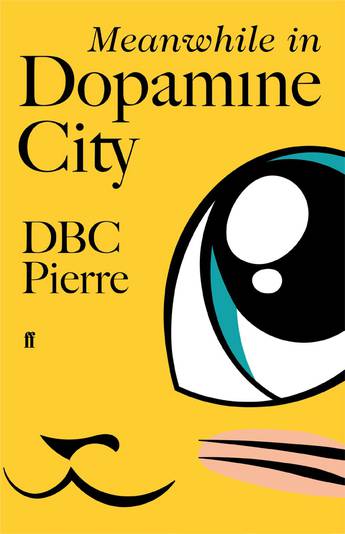 From the Man Booker Prize-winning author of Vernon God Little, a humane, deeply empathetic starburst of a satire; the most moving and entertaining exaggeration of the fearful nightmare of trying to raise a kid now.

Meanwhile in Dopamine City is the story of Lonny Cush, sanitation worker and single parent, kind-hearted and red-blooded, who is trying his best to protect his kids from the hysterical hyper-reality of 21st century life.

He lives in an unnamed fictional world city, dominated by a huge tech company akin to Google. A manual worker - although he has been put forward for 'retraining', a euphemism for redundancy - Lonny is out of sync with the changes in his hometown and his century, and doesn't have the means to give his quiet teenage son Egan and his precocious, ultra-demanding nine-year-old daughter Shelby (one of the most memorably awful children in literature!) what they need, or say they need. But with his mother-in-law circling for custody, and needing to win back his kids' favour after he maybe went too far in discipling Shelby, he succumbs, splashing out on the thing Shelby wants more than anything else: her first smartphone.

And so begins the silken silence as she drifts off to her room and down the rabbit hole of memes, trolls, hysteria and peer-pressure, and the true, vertiginous terrors of 21st-century life start flooding into the Cush household. And what should Lonny do? Rescue her or follow her? Because who is right: Lonny, or the world he and everybody else is living in now?
More books by this author

DBC Pierre is author of the novels Vernon God Little, Ludmila's Broken English and Lights Out In Wonderland, plus the picture book for distracted adults Petit Mal and the Hammer novella Breakfast With The Borgias. The novel Vernon God Little sold in 43 territories and won the Man Booker Prize, the Whitbread Prize for Best First Novel, the Bollinger Wodehouse Everyman Award and the James Joyce Award from University College Dublin. In 2016 Faber & Faber launched Release the Bats, a memoir and practical guide to breaking through in fiction without killing yourself. Pierre is a regular contributor to New Philosopher magazine and divides his time between the UK and Ireland.