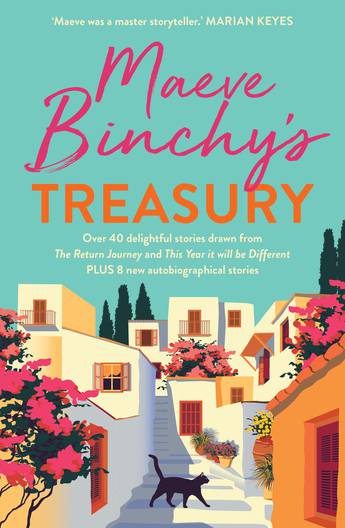 Over forty delightful stories drawn from The Return Journey and This Year it will be Different, plus eight new autobiographical stories.

'Maeve was a master storyteller - she made Irish women feel that their lives mattered and that their stories were worth telling.' MARIAN KEYES

'One of the funniest and best-loved storytellers in the world . . . once you read Maeve you are hooked for life.' IRISH TIMES


Molly is on an unexpected holiday in Greece which promises more than she ever imagined. Nick and Janet meet at the Sydney Fish Markets . . . everything seems perfect, what could go wrong? Victor, a self-confessed romantic, accompanies a friend to Australia with no thought of love on his mind.

Written with Maeve's trademark generosity, these heart-warming stories embrace families, friends, lovers and the lonely with laughter, wisdom and affection.

Among her entrancing autobiographical tales, Maeve revisits girlhood memories of her family's Christmas Eve in Dublin, tells of the search for a 'typical' French Sunday lunch in Paris and argues for the delights of travelling alone.
More books by this author

Maeve Binchy was born in Co Dublin in 1940 and was educated at the Holy Child Convent in Killiney and at UCD. After a spell as a teacher in various girls schools, she joined the Irish Times. Her first novel, Light a Penny Candle, was published in 1982, and each one of Binchy's twenty-one novels and short-story collections were bestsellers. Several have been adapted for cinema and television, most notably Circle of Friends in 1995. Binchy was awarded the Lifetime Achievement Award at the British Book Awards in 1999; and at the Bord Gais Energy Irish Book Awards ceremony in 2010 she was presented with the Lifetime Achievement Award by the then President of Ireland, Mary McAleese. Sadly and much-mourned, Maeve Binchy died in July 2012.