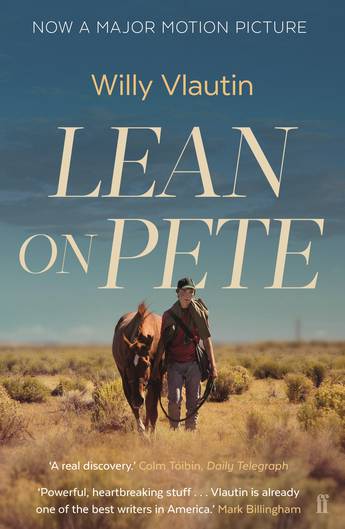 Film tie-in edition of Willy Vlautin's unforgettable story of a friendship and hope in dark times.

Fifteen-year-old Charley Thompson wants a home; food on the table; a high school he can attend for more than part of a year; and some structure to his life. But as the son of a single father working at warehouses across the Pacific Northwest, he's been pretty much on his own for some time.

Lean on Pete opens as he and his father arrive in Portland, Oregon and Charley takes a stables job, illegally, at the local race track. Once part of a vibrant racing network, Portland Meadows is now seemingly the last haven for washed up jockeys and knackered horses, but it's there that Charley meets Pete, an old horse who becomes his companion as he's forced to try to make his own way in the world.
More books by this author

Born and raised in Reno, Nevada, Vlautin started playing guitar and writing songs as a teenager and quickly became immersed in music. It was a Paul Kelly song, based on Raymond Carver's Too Much Water So Close to Home that inspired him to start writing stories. Vlautin has published three novels, The Motel Life (2006) and Northline (2008) and Lean on Pete (2010), which was shortlisted for the IMPAC Dublin Literary Award. His fourth novel, The Free was published in 2014.

Vlautin founded the band Richmond Fontaine in 1994. The band has produced nine studio albums to date, plus a handful of live recordings and EPs. Driven by Vlautin's dark, story-like songwriting, the band has achieved critical acclaim at home and across Europe. 2014 will see the debut album from Vlautin's new band, The Delines, featuring vocalist Amy Boone (The Damnations).