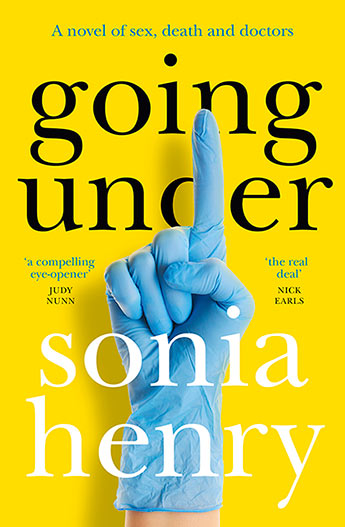 A darkly funny and sexy novel that blows the lid off the medical profession and life inside a hospital by a young doctor whose anonymous article about the pressures of trainee doctors went viral around the world.

'A compelling eye-opener written by one who clearly knows.' Judy Nunn, bestselling author of Sanctuary

Dr Katarina 'Kitty' Holliday thought once she finished medical school and found gainful employment at one of Sydney's best teaching hospitals that her dream was just beginning. The hard years, she thought, were finally over.

But Kitty is in for a rude shock. Between trying to survive on the ward, in the operating theatre and in the emergency department without killing any of her patients or going under herself, Kitty finds herself facing situations that rock her very understanding of the vocation to which she intends to devote her life.

Going Under is a rare insight into the world of a trainee female medic that takes an unflinching look at the reality of being a doctor. It explores the big themes - life, death, power and love - through the eyes of Dr Holliday as she loses her identity and nearly her mind in the pressure-cooker world of the hospital. But it is also there that Kitty might find her own redemption and finally know herself for the first time. Darkly funny, sexy, moving and shocking, Going Under will grip you from the opening page and never let you go.

'From the first grim failed attempt to cannulate a vein, I knew Going Under was the real deal. I'm still having flashbacks to my own intern days because of it. Sonia Henry writes with a combination of heart and precision that only the best of writers, and doctors, can manage.' Nick Earls, bestselling author of Bachelor Kisses
More books by this author

Sonia Henry is in her early thirties and lives and works in Sydney as a doctor. When she's not being a medic she devotes her spare time to writing and has been published in Kevin MD (America's leading physician blog), the Sydney Morning Herald, the Australian Medical Students Journal, and has scientific publications in the ANZ Journal of Surgery.

Her most widely read article was an anonymous piece, 'There is something rotten inside the medical profession', which detailed the stress of medical training and was shared more than 22,000 times and re-published widely around the world. This article led to the start of a conversation that her novel Going Under seeks to continue. Dr Brad Frankum, head of the AMA NSW, penned an open letter in response to her piece, as did many other doctors who decided that it was time to speak out.

In her spare time, Sonia loves drinking wine with her friends, eating good food, and trying to save money to travel to new and fabulous places. She is a keen skier in the winter and likes Sydney for its beaches in the summer. She tried to join a gym but isn't a morning person so has replaced exercise with an extra hour of sleep.

She is passionate about the topics covered in her book and would love to be an advocate for change in the medical system.

Going Under Chapter Sampler by Allen & Unwin on Scribd