From Where I Fell 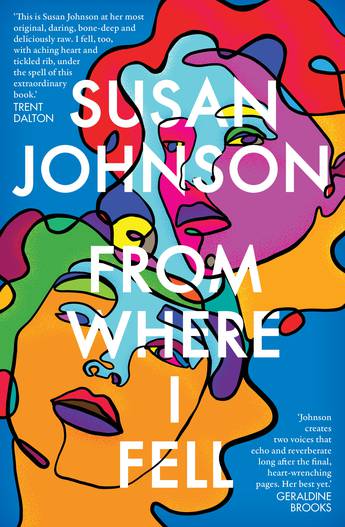 Two women from opposite ends of the earth begin corresponding by chance and start sharing the intimacies of their lives.

'Two deep, bright, razor-sharp women at opposite ends of the earth tearing the band-aids off their souls, exposing truths and lies buried beneath marriage, motherhood and the sacrificial siege of mid-to-late-life maintenance. This is Susan Johnson at her most original, daring, bone-deep and deliciously raw. I fell, too, with aching heart and tickled rib, under the spell of this extraordinary book.' TRENT DALTON

'In a strikingly original reimagining of an epistolary novel, Susan Johnson creates two voices that echo and reverberate long after the final, heart-wrenching pages. Her best yet.' GERALDINE BROOKS

'...a masterstroke of emotional intuition and intelligence.' The Australian


An anguished email from Pamela Robinson in Australia to her ex-husband in Paris accidentally ends up in the inbox of New York State teacher Chrisanthi Woods. Chrisanthi is sympathetic to Pamela's struggles and the women begin to tell each other the stories and secrets of their lives.

Pamela, responsible for raising her three sons, must re-invent the meaning of home following her divorce, and Chrisanthi, her dreams long dampened, must find home by leaving it. Temperamental opposites, their emails turn into an exhilarating and provocative exchange of love, loss and fresh beginnings, by turns amusing, frank and confronting.

'Witty, warm, heartbreaking and honest - an audacious masterpiece from one of Australia's best writers.' NIKKI GEMMELL

'Few novelists working today can match Susan Johnson's uncanny ability to map both the joys and horrors of the human heart and to wrestle the ebb and flow of life to the page. From Where I Fell teems with regret, eruptions of joy, the complexities of motherhood, the power of memory, the pain of divorce and dashed and gained dreams.' MATTHEW CONDON
More books by this author

Susan Johnson has been writing books since 1985, when she received the first of three grants from the Literature Board of the Australia Council which allowed her to write full time. Before that she was a journalist (starting at the Brisbane Courier-Mail and going on to work for such diverse publications as The Australian Women's Weekly, The Sun-Herald, The Sydney Morning Herald and The National Times).

She's written ten books: eight novels; a memoir, A Better Woman; and a non-fiction book, an essay, On Beauty, published by Melbourne University Press. Several of her books have been published in the UK, the US, and in European translation.

Susan has lived in the UK, France and Greece, but returned to Brisbane, Australia, in 2010. In 2019 she took off again to live on the Greek island of Kythera with her 85-year-old mother, Barbara. A memoir about their adventure is forthcoming.

From Where I Fell Chapter S... by Allen & Unwin