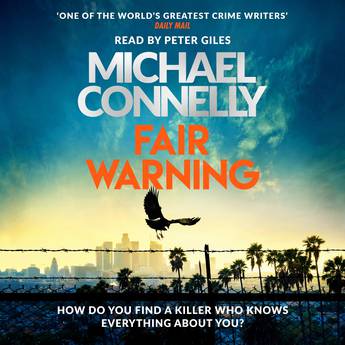 The hero of The Poet and The Scarecrow is back in the new thriller from #1 bestselling author Michael Connelly. Jack McEvoy, the journalist who never backs down, tracks a serial killer who has been operating completely under the radar--until now.

Veteran reporter Jack McEvoy has taken down killers before, but when a woman he had a one-night stand with is murdered in a particularly brutal way, McEvoy realizes he might be facing a criminal mind unlike any he's ever encountered.

McEvoy investigates--against the warnings of the police and his own editor--and makes a shocking discovery that connects the crime to other mysterious deaths across the country. But his inquiry hits a snag when he himself becomes a suspect.

As he races to clear his name, McEvoy's findings point to a serial killer working under the radar of law enforcement for years, and using personal data shared by the victims themselves to select and hunt his targets.

Called 'the Raymond Chandler of this generation' (Associated Press), Michael Connelly once again delivers an unputdownable thriller that reveals a predator operating from the darkest corners of human nature-and one man courageous and determined enough to stand in his way.
More books by this author

A former police reporter for the Los Angeles Times, Michael Connelly is the international bestselling author of the Harry Bosch thriller series and the legal thriller series featuring Mickey Haller, as well as several stand-alone bestsellers. His most recent #1 bestseller is The Night Fire.

He is the executive producer of the successful TV series Bosch, starring Titus Welliver, and the creator and host of the podcast Murder Book. He spends his time in California and Florida.