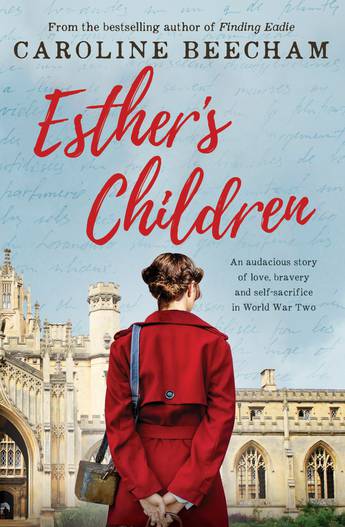 From the picturesque streets of pre-war Vienna to Britain's atmospheric cities in the grip of war, Esther's Children is the perfect read for fans of Kate Quinn's The Alice Network, and Kelly Rimmer's The Warsaw Orphan.

Inspired by the extraordinary life of Esther Simpson, Esther's Children is a powerful novel of love and courage.

Tess works tirelessly to rescue at-risk academics and scientists from across Europe, trying to find positions for them in Britain and America. In 1938, she secures employment for Harry at Imperial College, London, their love affair intensifying as the world heads into war; yet they are separated once again as Britain moves to intern European refugees.

With Harry detained on the Isle of Man while still waiting for news of his parents, Esther and the Society plead with the government for the interned scientists' release. When Harry is eventually liberated, his future with Esther is by no means secure as he faces an impossible choice.

Confronting the horrific dangers of World War Two with remarkable integrity and bravery, Esther Simpson is revealed as an exceptional heroine.

'[Beecham's] characters are likeable and real, her writing is engaging and the subject matter is gripping.' - The Weekly Times

'This moving story of Alice's fearless pursuit of her baby contains all the ingredients of a spy thriller … A wonderful page-turner with great relevance for our times.' - The Chronicle
More books by this author

Caroline is a novelist, writer and producer. She is the author of four books: the bestselling novel, Maggie's Kitchen (2016), Eleanor's Secret (2018), Finding Eadie (2020) and Esther's Children, to be published May 2022. Her debut novel, Maggie's Kitchen, was shortlisted for Booktopia's Best Historical Fiction in 2016 and nominated as Book of the Year and Caroline as Best New Author by AusRom Today. She has worked in documentary, film and drama, and discovered that she loves to write fiction and to share lesser-known histories; in particular those of pioneering women whose lives speak to us now. Caroline studied the craft of novel writing at the Faber Academy in Sydney, with Curtis Brown Creative in London, and has a MA in Film & Television and a MA in Creative Writing. She lives in Sydney with her husband and two teenage sons.