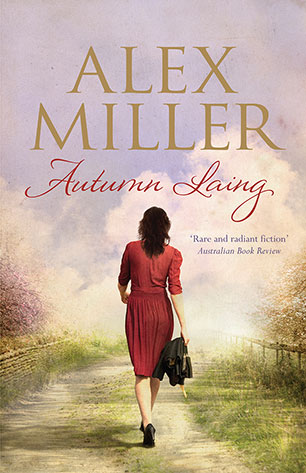 Autumn Laing has long outlived the legendary circle of artists she cultivated in the 1930s. Now 'old and skeleton gaunt', she reflects on her tumultuous relationship with the abundantly talented Pat Donlon and the effect it had on her husband, on Pat's wife and the body of work which launched Pat's career. A brilliantly alive and insistently energetic story of love, loyalty and creativity.

Autumn Laing seduces Pat Donlon with her pearly thighs and her lust for life and art. In doing so she not only compromises the trusting love she has with her husband, Arthur, she also steals the future from Pat's young and beautiful wife, Edith, and their unborn child.

Fifty-three years later, cantankerous, engaging, unrestrainable 85-year-old Autumn is shocked to find within herself a powerful need for redemption. As she begins to tell her story, she writes, 'They are all dead and I am old and skeleton-gaunt. This is where it began.'

Written with compassion and intelligence, this energetic, funny and wise novel peels back the layers of storytelling and asks what truth has to do with it. Autumn Laing is an unflinchingly intimate portrait of a woman and her time - she is unforgettable.
More books by this author

Alex Miller is twice winner of Australia's premier literary prize, The Miles Franklin Literary Award, first in 1993 for The Ancestor Game and again in 2003 for Journey to the Stone Country. He is also an overall winner of the Commonwealth Writers' Prize, in 1993 for The Ancestor Game. His fifth novel, Conditions of Faith, won the Christina Stead Prize for Fiction in the 2001 New South Wales Premier's Awards. In 2011 he won this award a second time with his novel Lovesong. Lovesong also won the People's Choice Award in the NSW Premier's Awards, the Age Book of the Year Award and the Age Fiction Prize for 2011. In 2007 Landscape of Farewell was published to wide critical acclaim and in 2008 won the Chinese Annual Foreign Novels 21st Century Award for Best Novel and the Manning Clark Medal for an outstanding contribution to Australian cultural life. It was also short-listed for the Miles Franklin Award, the Christina Stead Prize for Fiction, the ALS Gold Medal and the Commonwealth Writers' Prize. Alex is published internationally and widely in translation. Autumn Laing is his tenth novel.

Read an interview with Alex Miller on the Meanjin blog