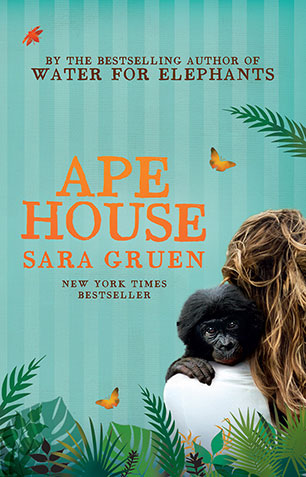 The wildly entertaining new novel from the bestselling author of Water for Elephants.

Isabel Duncan, a scientist at the Great Ape Language Lab, doesn't understand people, but apes she gets - especially the bonobos Sam, Bonzi, Lola, Mbongo, Jelani, and Makena, who are capable of reason and communication through American Sign Language. Isabel feels more comfortable in their world than she's ever felt among humans - until she meets John Thigpen, a very married reporter writing a human interest feature. But when an explosion rocks the lab, John's piece turns into the story of a lifetime - and Isabel must connect with her own kind to save her family of apes from a new form of human exploitation.

'Very, very few novels can change the way you look at the world around you. This one does.' -Robert Goolrick, author of A Reliable Wife, New York Times Bestseller

'Gruen has also woven a riveting human story around an already riveting premise.' Good Reading
More books by this author

Sara is a Canadian-born dual citizen (Canadian and American) who moved to the States in 1999 for a technical writing job. When she was laid off two years later, instead of looking for another job, she decided to take a gamble on writing fiction full-time. Sara' third novel, Water for Elephants, became a best-seller around the world and is now release as a major motion film starring Robert Pattinson, Reece Witherspoon and Christoph Waltz. Sara lives with her husband, three children, two dogs, four cats, two horses and a goat in North Carolina. Sara already has her eye on another horse and a donkey.