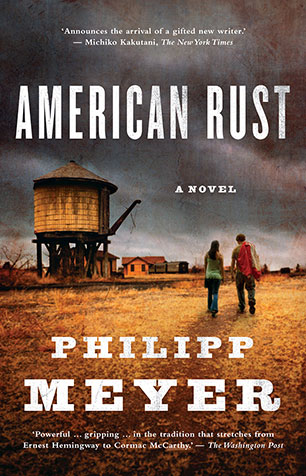 A heart-wrenching, unputdownable tale of redemption and survival in small-town America in the tradition of Richard Ford, Pete Dexter and Cormac McCarthy.

Set in a beautiful but economically devastated Pennsylvania steel town, American Rust is a novel of the lost American dream and the desperation - as well as the acts of friendship, loyalty, and love - that arises from its loss. From local bars to trainyards to prison, it is the story of two young men, bound to the town by family, responsibility, inertia, and the beauty around them, who dream of a future beyond the factories and abandoned homes.

Left alone to care for his aging father after his mother commits suicide and his sister escapes to Yale, Isaac English longs for a life beyond his hometown. But when he finally sets out to leave for good, accompanied by his temperamental best friend and former high school football star Billy Poe, they are caught up in a terrible act of violence that changes their lives forever.

Evoking John Steinbeck's novels of restless lives during the Great Depression, American Rust takes us into the contemporary American heartland at a moment of profound unrest and uncertainty about the future. It is a dark but lucid vision, a moving novel about the bleak realities that battle our desire for transcendence and the power of love and friendship to redeem us.

'. prying the lid off a rusted can of failed hope and small-town secrets . his taut, direct prose strikes the perfect tone for this kaleidoscope of fractured dreams . honest and unflinching storytelling.' - Amazon (Book of the Month)

'American Rust is both darkly disturbing and richly compelling . signals the arrival of a new voice in American letters.' - Patricia Cornwell

'With its strong narrative engine and understated social insight, American Rust is reminiscent of the best of Robert Stone and Russell Banks. Author Philipp Meyer locates the heart of his working class characters without false sentiment or condescension, and their world is artfully described.' - George Pelecanos
More books by this author

Philipp Meyer has been a James Michener Fellow in Fiction and has had stories published in McSweeneys, The Iowa Review and New Stories from the South: The Year's Best, 2007. 'One Day This Will All Be Yours' was selected by Edward P. Jones for the anthology Best American Short Stories: 2007 where it received an Honourable Mention.