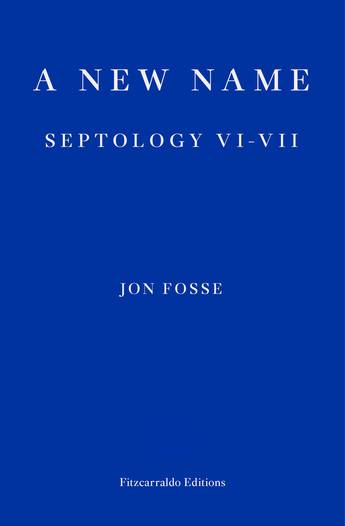 Written in melodious and hypnotic 'slow prose', A New Name: Septology VI-VII is a transcendent exploration of the human condition by Jon Fosse, and a radically other reading experience - incantatory, hypnotic, and utterly unique.

Asle is an ageing painter and widower who lives alone on the southwest coast of Norway. His only friends are his neighbour, Asleik, a traditional fisherman-farmer, and Beyer, a gallerist who lives in the city. There, in Bjorgvin, lives another Asle, also a painter but lonely and consumed by alcohol. Asle and Asle are doppelgangers - two versions of the same person, two versions of the same life, both grappling with existential questions.

In this final instalment of Jon Fosse's Septology, the major prose work by 'the Beckett of the twenty-first century' (Le Monde), Christmas is approaching. Tradition has it that Asleik and Asle eat lutefisk together, but this year Asle has agreed for the first time to celebrate Christmas with Asleik and his sister, Guro. On Christmas Eve, Asleik, Asle, and the dog Bragitake Asleik's boat out on the Sygnefjord. Meanwhile, we follow the lives of the two Asles as younger adults in flashbacks: the narrator meets his lifelong love, Ales; joins the Catholic Church; starts exhibiting with Beyer; and can make a living by trying to paint away all the pictures stuck in his mind. After a while, Asle and Ales leave the city and move to the house in Dylgja. The other Asle gets married too, but his wedding ends with a sobbing bride and is followed soon after by a painful breakup.

'Jon Fosse is a major European writer.' - Karl Ove Knausgaard, author of My Struggle
More books by this author

Jon Fosse was born in 1959 on the west coast of Norway and has written over thirty books and twenty-eight plays that have been translated into over 40 languages. His first novel, Red, Black, was published in 1983, and was followed by such works as Melancholia I & II, Aliss at the Fire, and Morning and Evening. He is one of the world's most produced living playwrights. In 2007, Fosse became a chevalier of the Ordre national du Merite of France, and he was awarded the International Ibsen Award in 2010. In 2011, he moved into Grotten, an honorary residence for artists on the grounds of the Royal Palace in Oslo. He was awarded the European Prize for Literature in 2014 and the Nordic Council Literature Prize in 2015. He currently has homes in Bergen, Oslo, and in Hainburg, Austria.

Damion Searls is a translator from German, Norwegian, French, and Dutch and a writer in English. He has translated many classic modern writers, including Proust, Rilke, Nietzsche, Walser, Ingeborg Bachmann, Alfred Doblin, Jon Fosse, Elfriede Jelinek, Uwe Johnson and Nescio.