A Boat Load of Home Folk 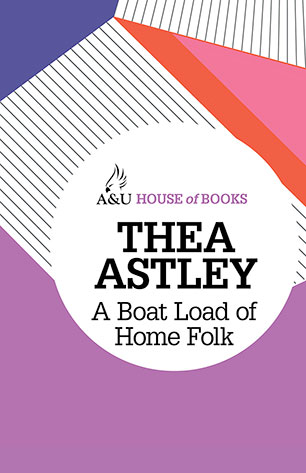 Only the force of a hurricane could reveal the deepest currents of their ordinary lives.

When the tourist ship Malekula arrives at a tropic island in the the Pacific the crushing heat and the looming hurricane intensify the hostilities and frustrations of the egocentric people on board. And when the hurricane bursts on the island the havoc it brings is less perhaps than the personal storms of man and wife, of spinster friends, of man and mistress, of erring priest.

Gerald Seabrook's pointless womanising achieves a finality of irritation for his suffering wife; elderly Miss Paradise drives her life-long friend, Miss Trumper, to make a fatal pilgrimage; the agent Stevenson sees the failure of his dream of love with his mistress; and the priest, Father Lake, explodes his own petty vices and his spiritual impotence. Their moments of truth are brilliantly illuminated as the story moves to its climax in the hurricane and its aftermath.

A sensitive and unsentimental specialist in suffering and conflict, Thea Astley sees the user and the used, the destroyer and the victim, with an unerring eye for character and motive. In A Boat Load of Home Folk her sympathetic insight is leavened by a rich vein of comedy that underlines the absurdity and pathos of the human dilemmas she describes.

Thea Astley was born in Brisbane in 1925 and studied at the University of Queensland. She taught in schools in Queensland and New South Wales, then at Macquarie University in Sydney between 1968 and 1980.

The author of fourteen novels, two novellas and two short-story collections, she won the Miles Franklin Award four times, for The Well Dressed Explorer (1962), The Slow Natives (1965), The Acolyte (1972) and Drylands (2000), which was also nominated for the 2001 International IMPAC Dublin Literary Award. The Multiple Effects of Rainshadow was nominated for the 1997 Miles Franklin Award, and in 1989 she was awarded the Patrick White Award for services to Australian literature. In 1992 she became an Officer in the Order of Australia, and received a special award at the 2002 NSW Premier's Literary Awards for lifetime achievement. She died in 2004.