With a Sword in My Hand 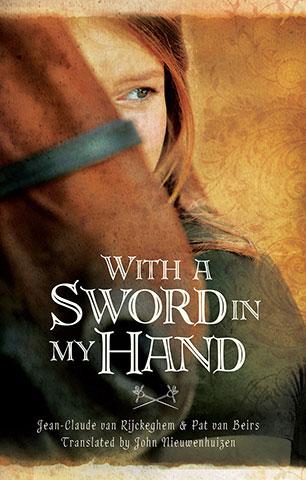 Marguerite's father is desperate for a son. Instead he's stuck with a feisty, stubborn, red-headed daughter who refuses to behave like a lady.

This exciting medieval romance-adventure story is based on historical fact about a 14-year-old heiress to Flanders called Marguerite Van Male.

'What am I going to do with you, my little Lady of Flanders; how are you ever going to make a Countess? The world will tear you to pieces.'

My ears are ringing. I smell the wine on my father's breath. With his hand he brushes a plait of hair from my face.

'Why didn't you die?' I shout, tears pouring from my face. 'Why did the arrows miss you? Why didn't the English hack you to pieces on the battlefield?'

Then I turn and run outside.

Shaking off the strict expectations of court life, Marguerite roams free - learning to ride, to fence and to outwit the boys. But the Count of Flanders has plans for his wayward daughter. Will Marguerite be able to resist the combined pressure of politics, power and a foreign prince? And has she met her match in Philip, the valiant knight in shirtsleeves?

Based on the real life of Marguerite van Male (1348-1405), With a Sword in My Hand is an intense medieval adventure, and Marguerite herself is a brave, headstrong and thoroughly charming heroine.
More books by this author

Jean-Claude van Rijckeghem and Pat van Beirs have written a lot together - young adult novels, the script for the historical graphic novel series, Betty and Dodge, and the Cannes film festival prize-winning screenplay for the hit film Aanrijding in Moscou (Moscow, Belgium). Jean-Claude is also a screenwriter and film producer who has contributed to the screenplays of such successful feature films as Man zkt. Vrouw (Man Seeks Woman), Kruistocht in Spijkerbroek (Crusade in Jeans) and De Bal (The Ball). Pat also works as a translator.

John Nieuwenhuizen is an Australian-based award-winning translator of Dutch and Flemish literature. In 2006 John was shortlisted for the Marsh Award for Children's Literature in Translation (UK) for The Book of Everything by Guus Kuijer.