The Winds of Heaven 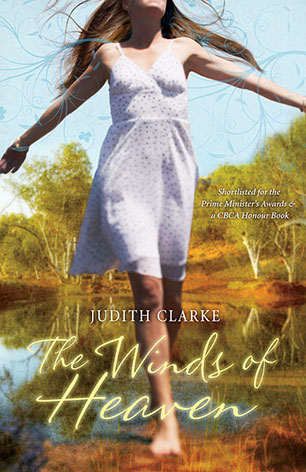 A deeply moving story set in the 1950s about two very different young girls - Clementine, who is growing up in the city, and Fan, her strong beautiful cousin in the country - and how the choices they make define their fates as women.

When Fan was little, she dreamed of magical countries in the far-away blue hills. As she grew up she dreamed of love, and the boys came after her one by one.

Clementine thought her cousin Fan's house in the country had a special smell: of sun and dust and kerosene, and the wild honey they ate for breakfast on their toast. But then there were the feelings: the anger that smelled like iron, and the disappointment that smelled like mud.

Still, Fan was strong and beautiful, and Clementine thought she'd always be like that. But Fan was seeking something, and neither she nor Clementine knew exactly what.

With sharp, poetic prose, insight and compassion, Judith Clarke tells a moving and beautiful story as she traces the lives of two young women separated by circumstance, but linked forever by blood and friendship.

'Brimming with tenderness and intrigue.a moving story about how friendships can shape lives.' Sunday Age

Judith Clarke was born in Sydney and educated at the University of New South Wales and the Australian National University in Canberra. She has worked as a teacher and librarian, and in adult education in Victoria and NSW. She now lives in the Blue Mountains.

Judith is a major force in young adult fiction both in Australia and internationally, where her books have been published in the USA and Europe to high acclaim. Her novels include the multi-award-winning Wolf on the Fold, as well as Friend of my Heart, Night Train, Starry Nights, and the very popular and funny Al Capsella series.