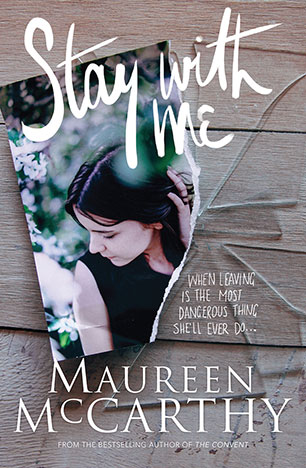 The unforgettable story of a young woman finding the courage to escape her present, face her past and embrace her future.

Try to leave and I'll find you.

Tess is trapped in a desperate situation - her violent partner now threatening not just Tess, but their daughter as well.

A chance meeting offers a way out, and a road trip back to the heart of Tess's past, and the family she's left behind. But can she ever trust again?
More books by this author

Maureen McCarthy is the ninth of ten children and grew up on a farm near Yea in Victoria. After working for a while as an art teacher, Maureen became a full-time writer. Her novels for young adults include The Convent, Somebody's Crying, Rose By Any Other Name and her much loved bestseller Queen Kat, Carmel and St Jude Get a Life, which was made into a highly successful four-part mini-series for ABC TV.

Maureen McCarthy - Stay With Me (Extract) by Allen & Unwin

I’m a big fan of this writer, and was excited to read Stay With Me, the latest YA novel by Maureen McCarthy. Tess is very real teenage girl at the start of the book, naïve, restless, looking for something, and not sure what that is. Australian, seventeen, just finished school, Tess decides on a whim to go on a ‘schoolie’s’ holiday to the Gold Coast, not sure about the girls she goes with, not sure of her direction in life. In reality, she is looking for someone who will love her forever. What she finds is much darker, and her life over the next few years becomes more and more nightmarish.

The story begins with a note about Tess’s grandmother. This is relevant because Tess is her namesake, and Tess believes that somehow this grandmother will protect and save her. From this brief introduction, we leap straight into a nightmarish story of an escape, from something dark, violent, and wicked, and involving a small child. This story is told in the first person, with present and past mixed up so that gradually the ‘backstory’ is revealed.

The book would work well with teenage girls, possibly late Primary to upper Secondary. At 352 pages, it is a good, solid read. It could lead to discussion about friendship, parenting, adolescence, mental health, sexuality, independence, love. It could fit into Curriculum studies in Legal Studies around Domestic Violence and abuse. There are also jumping off points for discussion about beliefs in spirituality, ghosts, the life of those who lived in the past under the kind of repressive, pre-feminist Mental Health Act laws that we witness in Therese’s life. To be imprisoned for life by a husband who was able to use the law against a wife he was tired of is today incomprehensible in Australia, and this history should not be forgotten. In addition, the rich, easy control of language, and in particular, of conversation, by McCarthy provides areas for discussion and great models for Creative Writing.
Helen Wilde, SA

With a long list of book credits to her name, Maureen McCarthy is a familiar name in the world of publishing. Her previous books including, The Convent, Queen Kat, Carmel and St Jude Get a Life and Chain of Hearts, have firmly established her reputation a writer of quality fiction for both Young Adults and Adults. McCarthy’s latest offering, titled Stay With Me, engages with the topical issue of domestic violence and provides a sensitively written psychological portrait of a victim of such abuse.
Set in the landscape of country New South Wales, 21 year old Tessa, along with her 3 year old daughter Nellie, escape the hands of her abusive partner Jay. What follows is a dynamic narrative that freely flits back and forth in time, as it outlines the circumstances surrounding her seduction, resulting entrapment, physical and emotional abuse, along with her mental deterioration. Paralleled with this is the story of Tessa’s grandmother, whose committal to an asylum and death shortly thereafter, has haunted the family since.

With a protagonist aged in her early twenties, McCarthy has penned a tale that will resonate strongly with a New Adult audience. In the classroom this story will find its place with senior students. Although the beauty of the language and the sophistication of the narrative ensure its suitability for whole class study; the subject matter of the text may deem it a tricky choice for some contexts. However, in spite of this, the text itself remains an appropriate choice for independent study and meaningful comparisons might be made with film texts that might include Water for Elephants (2011) or even Alice Walker’s profound novel The Colour Purple (1982) along with the 1985 film adaptation.
Stay With Me is a deeply moving and highly immersive story whose authentic and harrowing portrayal of abuse will haunt its readers forever.
Tanya Grech Welden, Gleeson College, SA

Teenage books have a hidden meaning – a warning; food for thought. Stay with Me is one such book opening a Pandora’s Box of material for ‘tutorial’ discussion to explore the ideas and the ‘what ifs’ of life. Maureen McCarthy’s challenging novel appears to be for teenage girls… but the emotional subtext is far greater; I question whether teenage girls have the live experience to fully appreciate the intricacies. They are more interested in ‘happily ever after’ stories, no matter what their genre.

More relevant to women than men because of experiential background, the novel explores the patriarchal exercise of power – which is the central theme of Stay With Me – and male dominated society to which women are allowed to belong as long as long as they don’t ‘rock the boat’! Many people don’t see the scenario presented as realistic but it happens all the time; it’s about what happens to women. Here we get the inside picture. The point of view is that of a narrator telling a ‘victim’s’ story though the common perception is that she must be hard to live with, she must have done something to provoke this response. McCarthy’s characterisation is beautifully crafted. Narcissistic men like that know how to behave publically to curry favour and to manage the situation; he got her when she was young and trained her and she was naïve and accepting her guidance. Is it Stalking or is it the nature of the beast. It is in her head!

Stay with Me has a super-natural theme scaffolded around the mental health report of older relative. The sub-texts are to do with self-image, trust, and the language of discrimination and injustice. With the many questions the story raises, this is one for conference discussions.
Michael Cruickshank, Hellyer College, TAS