Home>Browse>Books>Children's>Young adult fiction>Have Sword, Will Travel: Have Sword Will Travel 1 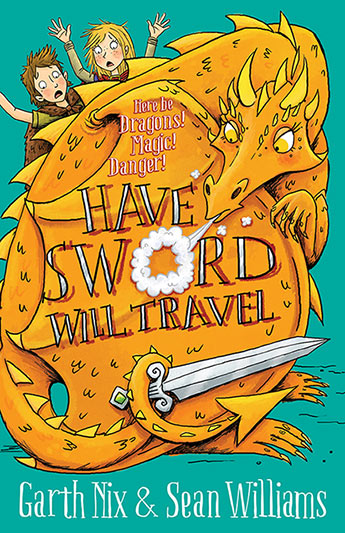 When Odo and Eleanor stumble upon an ancient sword in a river outside their village, something very unexpected happens ... the sword starts to talk! Much to Odo's dismay he discovers that he's awoken a famous enchanted blade called Biter, and thus has instantly become a knight. Eleanor would love to become a knight - but she's not the one with the sword. Unearthing Biter is only the start of their troubles; soon boy, girl and sword must depart on a noble quest to save their kingdom from threats - in both human and dragon form.
More books by this author More books in this series

Garth Nix and Sean Williams first collaborated on the Troubletwisters series, which they followed with a book in the Spirit Animals series, Blood Ties. Garth is also the bestselling author of the Seventh Tower series, the Keys to the Kingdom series, the Old Kingdom series, and Frogkisser! Sean's bestselling novels include those in the Twinmaker series and several in the Star Wars universe. Both Garth and Sean live in Australia - Garth in Sydney and Sean in Adelaide. This is their first book featuring Odo, Eleanor, and Biter... but it won't be their last.