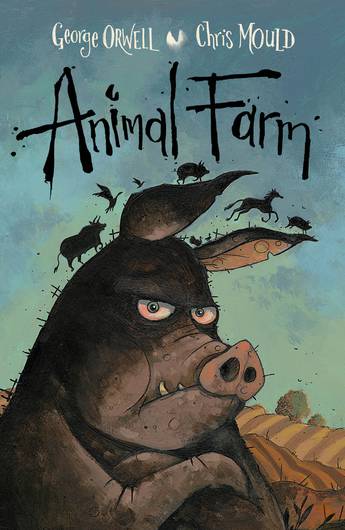 One of our hand-picked classics that no home should be without, Animal Farm is the classic story of revolution - now with fabulous illustrations by Chris Mould.

When the animals overthrow the oppressive Mr. Jones, they think their problems are over, but in Orwell's great indictment of the Russian Revolution, they find that power corrupts and they have merely swapped one form of tyranny for another.

With an exciting new cover and inside illustrations by superstar Chris Mould.
More books by this author

George Orwell (1903-1950) is one of the world's most influential writers, the visionary author of Animal Farm and Nineteen Eighty-four as well as non-fiction classics. By the time of his death in 1950 (and since), he was world-renowned as a journalist and author.

Chris Mould has illustrated the gamut from picture books and young fiction, to theatre posters and satirical cartoon. As well as writing his own fiction and illustrating Ted Hughes' The Iron Man to much critical success, he has teamed up with author Matt Haig for the bestselling A Boy Called Christmas, A Girl Who Saved Christmas, Father Christmas and Me and The Truth Pixie. He lives in Yorkshire with his wife, has two grown-up daughters, and when he's not drawing and writing, you'll find him . . . actually, he's never not drawing or writing.